Garth Nix: A Retrospective On His Work (to date)

With the posting of my last book review I have completed reading all of Garth Nix's published works. I thought I'd make this a bit of a celebration post by going through my reading of him. There will not be any book reviews but simply my reflections on how I started reading him and the progress I made. Any text links will take you to my reviews on this blog.

The first Garth Nix books I read were The Seventh Tower series of 6 books. I was captivated from the first book and read all six books back to back, something I don't often do with series. This is a YA fantasy series with a very unique premise and wonderful world building. I was pretty sure I was going to be hooked on this author.

Oddly enough, the next book I picked up was Shade's Children which is unlike any of Nix's other books. Not his usual fantasy fare, this is a dark post-apocalyptic novel which I would say is just as much an adult book as a YA book. This is my absolute favourite of Garth Nix's books. I don't know why, but this is one of those books that people either hate or love. For me, I think it is his best book to date.

Next book I read was Sabriel, which is the first book in The Abhorson Trilogy (sometimes referred to as The Old Kingdom Trilogy). This is a very dark YA fantasy series that is Nix's most famous work and the most widely read. I loved Sabriel but must admit not as much as the previous books had I read to date.

At this point I decided to try the Keys to the Kingdom series and started with Mister Monday. It was 2004 and only this and Grim Tuesday had been written so I've been following along each year reading the new installment as it comes out. I absolutely love this series! I've read up to Lady Friday but have found that, especially with the last two books, that with reading one book a year I'm forgetting the original plot and not enjoying them as much as I could be if I had the flow of reading them close together. Superior Saturday is being published this month (August 2008) but I have decided that I will not read it now. Instead I intend to wait until the final book about Sunday is published (hopefully in 2009) then at that time I will go back and re-read the entire series before completing the last two books.

Last year I decided to go back and finish The Abhorsen Trilogy and finished Lirael and Abhorsen. Lirael is my favourite of the three books and I think that is a common feeling among other fans of the series as well. I also read Across the Wall which contains a novella that continues the Abhorsen trilogy and a collection of short stories Nix has had previously published throughout his career. The short stories are good, some better than others but overall a good book and the Abhorson novella is a must for fans of the series.

Next up was The Ragwitch, which was Nix's first published novel. It is typical YA fantasy fare and I did not enjoy it much and will say it is my least favourite book of his.

And finally the last book I read was a collection of short chapter books for younger children, One Beastly Beast (Two Aliens, Three Inventors, Four Fantastic Tales), which I thoroughly enjoyed. 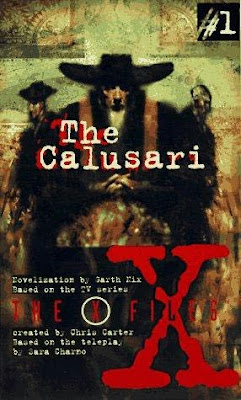 At this point I will mention that Garth Nix did also write a YA adaptation of an X-Files TV Show in 1997 called The Calusari. I did read this book when I was reading all the X-Files books and didn't realize it was written by Nix until a much later date.

So that takes us to the present where we have Superior Saturday coming out this month (today, Aug. 1, to be exact!), then the last book of the Keys to the Kingdom hopefully will be published in 2009. Also there are two more Old Kingdom books in the works with tentative publishing dates within the next few years.