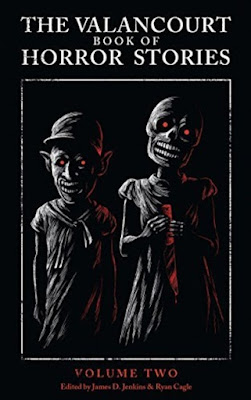 
A great collection of horror stories spanning the centuries with the earliest story written in 1823 and the latest, 2017. This was an all-around winner for me averaging out to a solid four. There were only 2 duds for me. All of the stories were first time reads for me and there were authors I'd never heard of before. A unique collection and not your run of the mill horror anthology.

1. Samhain by Bernard Taylor (1991) - A middle-aged couple of witches is preparing for the coven's annual Halloween ceremony. The wife is the central figure and she has been plotting her husband's death for several months to occur this very evening. She's a sharp-tongued, nagging wife who feels her husband deserves nothing less. There is a twist ending but I had guessed it early in. The different forces on which the husband and wife rely on is telling, though. (4/5)

2. The Bell by Beverley Nichols (1946) -) A man's servant he's had forever dies. The servant did everything for this man, so much s that he feels he missed out on life itself. On his first night alone he cannot stop his hand from ringing the bell. Then begins an agonizing wait as he feels his servant trying to reach him even unto death. (3/5)

3. The Elemental by R. Chetwynd-Hayes (1974) - My favourite so far! A young couple goes to the country for a week after the busy life of the city. On the train down, the man meets a psychic who tells him he has a murderous elemental attached to his left shoulder. He scoffs, meets up with his girl and then they are in for a night of terror which ends up in them calling the psychic to the rescue. Twist creepy ending. Fun read! (4/5)

4. Herself by M.E. Braddon (1894) - Splendid. This is a short novella by one of my favourite Gothic writers It's influence by Wilde's "Darian Gray" is obvious but the mirror's effect is very different. Too simple of a plot to recount without spoilers so I'll just say wonderfully written and paced with delightful melodrama. (5/5)

5. The Creatures in the House by Robert Westall (1980) - Excellent! An elderly lady dies and gives specific instructions for her nearest female heir to follow in order to keep the estate. She must live alone in the house and never marry. By this point we know all too well there is a family "guest" who feeds off these women, generation after generation, but Sally is the first to fight back and it takes her interest in cats to foster that strength. Well-paced (5/5)

6. November the Thirteenth by Russell Thorndike (1934) - The origin story of a local myth/curse. Boring and dull, not to mention stilted writing. (0/5)

7. Halley's Passing by Michael McDowell (1987) - We follow a serial killer around as he continuously offs people and writes everything down as quick notes in a notebook. The twist at the end gives us a new view of who he is. Very good. (5/5)

8. The Nice Boys by Isabel Colgate (1965) - This is a pretty creepy story which has an unreliable narrator leaving us unsure whether to believe what happened or not. A woman with moods who admittedly goes into passionate fits of anger believes that two young men staying in the same small hotel in Venice are murderers wanted back in London. (5/5)

9. The Watcher by the Threshold by John Buchan (1900) - I'm not a fan of Buchan and this did nothing to change my mind. I find his writing tedious as it is stilted in an old-fashioned way, with archaic words and no flow to the sentences. There is way too much description of scenery here before the plot even gets started. The tale of a man who is presumably being haunted by the devil and ends with no resolution. I forced myself to read it (0/5)

10. Tudor Windows by Nevil Shute (early 1930s, 2017) - A short tale that is published here for the first time. I'm fond of Shute so was looking forward to this one and it didn't disappoint. Certainly not a "horror" story but a supernatural one. It has a very fine twist on the haunted house theme. (4/5)

11. No Sin by John Metcalfe (1931) - Classic Gothic story about a recent widower who must follow the instructions of his late wife's letter. Removal of his ward from the turret room and displaying a custom made a naked statue of his wife in the room. Everything a standard Gothic needs: love, a haunting, and death. Not exactly exciting but good. (3/5)

12. The Dice by Thomas De Quincey (1823) - A great Gothic story of the classic theme of a man selling his soul to the devil. Generations of fathers have passed on a prophecy to the eldest son and Scholl hears from his father on his deathbed that he is the prophesied one from the old family curse. Good story with ghosts, the devil and a couple of murders. (4/5)

13. Camera Obscura by Basil Copper (1965) - The introduction to this tale claims it is the "most outright chilling story in this series". I don't agree finding it quite tame but yes it does have a haunting atmosphere. A moneylender walks to the remote home of a wealthy recluse who now owes him 300 pounds and has come to demand speedy payment. But when he arrives the man is hardly interested in his debt focusing more on the behaviour of the moneylender who eventually meets his doom. (3/5)

14. The Boys Who Wouldn't Wake Up by Stephen Gregory (2017) - Published here for the first time. Great ending for this collection as I finished it just after Christmas as well. Here we have the traditional Christmas ghost story with all the needed tropes: boarding school, grumpy old headmaster, restless nights, somnambulism and of course, ghosts! This Christmas one boy has been left all alone with the headmaster in an otherwise empty school. This night he gets to hear the HM's deep, dark secret. Very atmospheric and a joy to read (5/5)