The Club of Queer Trades by G.K. Chesterton 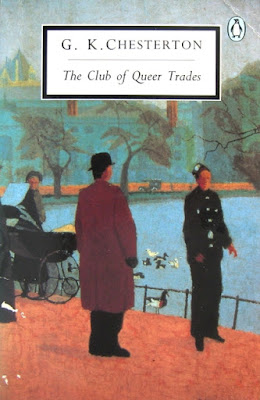 A short collection of quaint stories featuring Basil Grant, an eccentric, a former judge and current hermit. The narrator is his friend and tells us of conundrum's that Basil gets himself involved in and must solve. Halfway through Basil's brother Rupert who is an amateur detective and even more eccentric joins in the fun. Much more light-hearted than Father Brown stories. None of the stories features the club of queer trades but we are introduced to it in the first story and each subsequent story has a tie to the club.

1) The Tremendous Adventures of Major Brown - A highly interesting tale of mistaken identity and man's natural need to seek out adventure. Just long enough to get interested in the characters and the solution to the mystery was good fun. Loved the brief tongue-in-cheek mentions of both Sherlock Holmes and Father Brown. Great story to start the collection. (5/5)

2. The Painful Fall of a Great Reputation - This was a bit tedious to read being mostly a conversation, or two, solely consisting of witty repartee. Said repartee being the plot of the story it is not out of place but much of it is of its own times making parts hard to "get" for a modern reader. However, there were quite a few quotable gems as is usual to be found in Chesterton's writings. (2/5)

3. The Awful Reason of the Vicar's Visit - So this time around our narrator relates his own story as he is visited by a vicar with a most outrageous story of being forced at gunpoint to dress up as a little old lady. Basil comes in near the end to solve the shenanigans going on and we are introduced to a new trade worthy of the Club. (4/5)

4. The Singular Speculation of the House-Agent - This is a farce. As usual, we have our narrator and Basil, but joining them this time is Basil's brother Rupert who is even more of a character than Basil. Rupert is an amateur detective and is suspicious of everything, putting facts together and coming up with totally wild deductions. This time he's just met Basil's adventurous friend and immediately distrusts him and tries to convince Basil he is a thief and a scoundrel. It was a lot of fun but I figured it out way before the characters did. (4/5)

5. The Noticeable Conduct of Professor Chadd - A strange story of a man who goes mad after a lot of witty repartee questioning his profession. He then ends up with a job worthy of the Queer Trades Club. Silly, really (3/5)

6. The Eccentric Seclusion of the Old Lady - The narrator and Basil hear a womaning moaning to be let out but when they find and try to rescue her she refuses to leave her prison. This starts off the finishing events which ties all the previous stories together and we finally get a glimpse of "The Club of Queer Trades". (4/5)