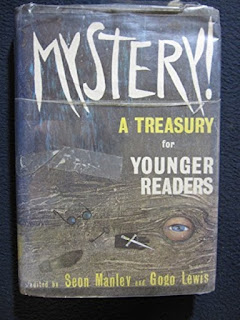 Mystery! A Treasury for Younger Readers edited by Seon Manley & Gogo Lewis
My rating: 4 of 5 stars


A decent collection of stories by some of the great writers: Twain, Poe, Thurber, Fitzgerald and so on. The editors did a good job of picking stories that would appeal to the young person and included a short intro to each story which I really appreciate in anthologies, bonus point just for that. Not much here was "new" to me but I had great fun rediscovering some old favourites.

1. The Murder of George Washington by Richard M. Gordon (1959) - A good start to the collection with this short story that poses the questions "when is murder not murder?" and "when is poison, not poison?" The narrator lets us read a letter that has been in his family for generations. It is from a Loyalist and describes the immediate plan to murder George Washington. (4/5)

2. The Night the Ghost Got In by James Thurber (1933) - I was so excited to see this story. I loved Thurber as a kid and hadn't read anything by him in years. The story wasn't as funny as memory served but it's still hilarious from the antics of the mother and grandfather to the behaviour of 1915 cops. (4/5)

3. Wally the Watchful Eye by Paul W. Fairman (1960) - Written as a series of letters a young man sends away for a mail-order private eye course of lessons. He and the fellow at the company strike up a mail correspondence as Wally learns and begins to suspect his boss of murdering his wife. Written in a humorous style. (4/5)

4. The Mystery of the Raymond Mortgage by F. Scott Fitzgerald (1909) - This story has the distinction of being Fitzgerald's first published work. Written when he was only 13 the writing is of a more mature nature. I'd call this a crime rather than a mystery as we easily figure out the who at the beginning but don't know the how or why until the end. The story involves a husband entering his wife's room and finding the bed stained with blood, the room ransacked, his wife missing and his daughter, dead, under the bed. Shortly afterwards outside the broken bedroom window is found the dead body of a household servant. Not bad but it does have some plot holes. (3/5)

5. A School Story by M.R. James (1911) - A few men settle down at a club and start talking about school ghost stories. Two men do the talking while there is at least one other person there. A tale is told of an odd Latin teacher, a scary apparition one night and the disappearance of that teacher. Then a prologue gives a mysterious answer to the event. ( 4/5)

6. Witches, Fairies, and Strange Folk - A selection of poetry starting with several of Shakespeare's fairies Nothing here I liked with the exception, of course, of Poe's "Raven". (not rated)

7. Blow Up with the Brig! by Wilkie Collins (1859) - A man retells a situation similar to "The Pit and the Pendulum" only with a lit candle and a powder keg. It is many years later that he is telling the tale; is he sane or mad? (3/5)

8. The Mysterious Man on the Moor by Charles Dickens (excerpt from "Great Expectations" 1861) - I've read "Great Expectations" a few times and consider it one of my favourites by Dickens. I wasn't thrilled to see this here though as I very much dislike when anthologies contain excerpts from novels. That being said, this is an entertaining read being the first chapter in the book where Pip meets the convict on the moors. It was a good feeling meeting these characters once again and I think that this would probably entice a young reader on finding, and reading, the whole book. (4/5)

9. Charms and Spells - A silly section, which I suppose may appeal to the intended audience, of old sayings people used to say for such things as finding who will be their husband or wife, for a good harvest, house blessing, a good harvest, and ending with Marlowe's spell of invisibility, which I'm assuming is from Doctor Faustus. (no rating)

10. Seeking the Buried Treasure by Mark Twain (excerpt from "The Adventures of Tom Sawyer" (1876) - Another chapter taken from a novel which is disappointing. Twain wrote so many short stories that there's really no excuse. This is a short chapter and has Tom and Huck digging for buried treasure but their talk of dead people, witches and haunted houses scares them off the task. (3/5)

11. Robbie by Isaac Asimov (1940) - I was so excited to see this story. I haven't read "I, Robot" for years but this was one of my favourite stories from it. Perfect for this collection of stories suitable for young people. Set in the grand future of 1998 a little girl has a robot nanny who was designed specifically to care for children. The mother wants to get rid of it as she worries that her daughter won't grow up "normal" since she refuses to play with anyone but the robot and thinks of him as a human being. (5/5)

12. The Adventures of the Three Students by Sir Arthur Conan Doyle (1904) - A perfectly cerebral Sherlock Holmes story. A distraught professor comes to Holmes for his discretion in the midst of certain scandal should the news get out. He arrived back at his rooms to see that his key had been left in the door, then he finds evidence that his exam papers for the morrow have been disturbed. It is an important exam for a scholarship and he must find the culprit so he doesn't profit from his deception. (5/5)

13. The Canterville Ghost by Oscar Wilde (1887) - What a joy to read this again! An excellent classic that plays with the ghost story making it more humorous than scary. It also has a bit of a soppy ending about the meaning of love, life and death but the getting there is fun. The story of an American family who moves into an estate inhabited by a three-century-old ghost. Once the ghost gets up to his tricks the family decides to terrorize and "haunt" the ghost instead. Great fun. (5/5)

15. Our World of Mystery by Seon Manley and Gogo Lewis (1963) - A short concluding essay on how the ghost story has evolved to the current modern (1960s) detective. Out-dated. (not rated)