Lions, Harts, Leaping Does and Other Stories by J.F. Powers 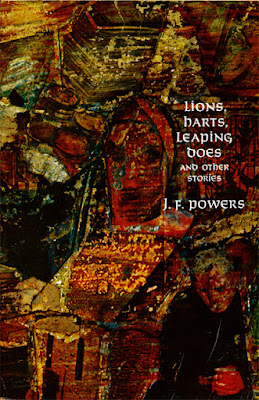 Lions, Harts, Leaping Does and Other Stories by J.F. Powers
My rating: 3 of 5 stars


A collection of Catholic stories by a writer known for his Catholic writing including priests as main characters. The introduction is worth reading as it explains the opposing of views by scholars as to whether he is a writer of religion or simply one who writes about religious characters. Chesterton highly praises him, and I take Chesterton seriously, but I think I have to agree with the other view from this sampling as I only found two of these stories to tackle religious topics and themes. The writing is good and I enjoyed reading the stories because of that and I think, in the end, Powers is simply showing that priests are people too.

1. Dawn (1956) - Shows the pettiness of people. An unmarked envelope is found in the collection plate addressed to the Pope. Everybody, starting with the parish secretary, passes the buck and the letter goes through the hierarchy until it reaches the Bishop who'd rather not have to deal with it. Not an exciting story but has shown me the author's writing style and I'm looking forward to the next story. (3/5)

2. The Lord's Day (1943) - A stingy, self-centred priest has four of five mulberry trees cut down because they attract bees which sting him on his porch. Then the story switches to the point of view of mother superior of the parish. They get together on Sundays to count the collection money and they were opposed to the tree situation. Needing a new stove the Father is called in to look at it and his advice is frustrating to the Sister who feels like the stain of money is on her hands. More a study in character than having any plot, it continues to show the quality of writing. (3/5)

3. The Forks (1946) - There really isn't a plot to summarize. A young priest, assistant to a Monsigneur, relates a-day-in-the-life-of emphasizing the difference in worldview between him and the old man. While not exciting, I'm loving the flow of writing from this author. (3/5)

4. The Valiant Woman (1947) - A Father's woes about his domineering and sneaky housekeeper, all reflected in the timelapse of one evening. (3/5)

5. Prince of Darkness (1947) - Now we turn to a novella divided into three parts: Breakfast, Noon, and Night. It's hard to give a summary as nothing really happens. We are given a look inside the mind of a priest who never reached his aspirations of having his own parish, instead, being the constant assistant. He can be a bit petty and self-aggrandizing but are these not characteristics every man displays at times to certain degrees? Always being passed over for someone younger and ambitious the Father gets his hopes up today that this may be the day he is reassigned to, finally, his own parish. In conclusion, we get a look into the mind and daily life of a priest with aspirations that really doesn't differ from that of any man. (3/5)

6. Zeal (1956) - On a pilgrimage to Rome and the British Isles, an acquiescent Bishop finds himself plagued by a younger priest full of zeal. The Bishop torments himself as he tries not to offend yet find the solitude he is looking for. (3/5)

7. Death of a Favorite (1950) - This is a rather strange story narrated by the rectory cat. The assistant priest from the earlier story "Prince of Darkness" returns, now residing at his reassigned parish but still the assistant. The cat tells of his pampered life with the pastor of the church but that Father Burner, the assistant, doesn't like him. When the pastor leaves for a three-day convention a missionary priest comes to help out while he's gone and the two of them devise a plan to get rid of the cat once and for all. The priests are shown as cruel and vindictive(3/5)

8. Defection of a Favorite (1951) - This is my favourite so far. A continuation of the story above. The old priest slips and breaks his hip putting him out of the picture for over a year. The assistant, Father Burner, now finds himself taking over the duties as pastor. He works uncommonly, for him, very hard at the job and over time his whole character is affected by his new responsibilities. Again narrated by the cat, he tells how responsibility and realistic hope for the future changed Father Burner from a petty man to a good man. (4/5)

9. The Poor Thing (1949) - The first story in this collection that doesn't feature a priest. A prideful woman finds herself at an employment agency saying she doesn't have to work but would rather like to just so as to keep busy by taking in some light sewing. The agency quickly finds her a placement as a companion to an old invalid lady. She gets along well with "the poor thing" but as time goes by she feels uneasy and knows she must go. After a few attempts, she finally does leave only to find herself taking up the job once again by the end. (3/5)

10. A Losing Game: (1955) - A curate sharing the rectory with his eccentric, hoarder of a pastor tries to get the upper hand with him as he tries to get a table for his room. After an eventful evening in the basement warding off rats and getting shot in the leg he realises that it will always be a losing game. Quite funny! (4/5)

11. The Devil was the Joker (1953) - A longer story though not a novella. The length lets the reader get to know the characters in a way much shorter stories don't allow. Rather a touching story about following one's heart and determination to reach your goal without settling for less. Our main character is a young man asked to leave the seminary. Choosing to take a job close to the clerical life he becomes a salesman to "the religious" and learns it's seedier than he'd thought and determines to get back to seminary. (4/5)

12. Lions, Harts, Leaping Does (1944) - This is a dense story and one of contemplation. It is the first one in this collection which is religious in nature rather than just about the religious. It is the inner thoughts of an old priest who goes from being just very old to laying on his deathbed. He contemplates all his errors in virtue much of the time(ie, the Seven). His greatest failing which he dwells upon is not going to visit his own brother recently for the right reason but the wrong motive. His brother dies shortly after at age 92. There's a lot more to the story than can be summarised but I found it, though slow and pensive, to be engaging. (3/5)

13. The Presence of Grace (1954) - This story was a really good note to end with. Considering all the other stories this one is my absolute favourite and therefore getting the coveted 5 stars. This story features the Father from the previous one called "A Losing Game". It's a longer story and really examines the character of the two pastors. This is also one of the few actually religious stories, dealing with the rumours, gossip and misunderstandings that happen in a small congregation when it's found out that a widow has a man living in her house. Well-written and I really liked these two characters. (5/5)