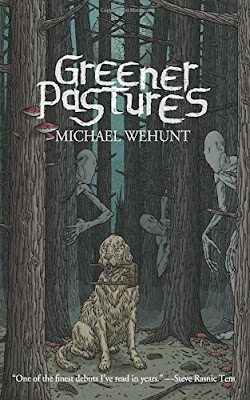 Greener Pastures by Michael Wehunt
My rating: 3 of 5 stars


An odd assortment of "tales of the weird". One could call them horror stories but they cross many genres. I found the collection a decent enough read but less than stellar. Most tables seemed to just miss the mark, needing a final touch to make them more satisfying reading.

1. Beside Me Singing in the Wilderness (2014) - A 130yo woman comes back to the shack she lived in for a while as a child. Her twin sister has died and she is returning to the "bloodfall" to return her and Sissa's tainted blood back to where it came from. A brief history of the two and the main character's thoughts reveal they are blood-hungry creatures but just what kind is never made clear. Well-written and looking forward to the next story. (3/5)

3. Greener Pastures (2015) - This one has more of an actual plot to it. A trucker stops at a near-deserted truck stop and a strange guy sits down with him talking weird. The ending is inevitable once you figure out what the weird guy is going on about. An abrupt ending that leaves you imagining what happens next, but it was expected. Not bad. (3/5)

4. A Discreet Music (2015) - A man's wife of 40 years passes away and he starts to think about and track down the only man he ever slept with 30 years ago. Meanwhile, all this time he is changing into a swan and being visited by his wife's spirit. A strange story and a good read but it ends unsatisfactorily as there is no significance to anything nor even an "aha" moment. (3/5)

5. The Devil Under the Maison Blue (2015) - My favourite so far. This one actually has some meaning to it and ends with a feeling of satisfaction. It deals with child abuse and with the devil. You can tell what is going to happen before it does but still a well-told story. (4/5)

6. October Film Haunt: Under the House (2017) - This is a really messed up (in a good way) tale told from the point of view of 5 different people. It's about found footage and is written in a literary found footage style. Five people camp out at this house where they've decided the found footage was filmed. They do this yearly at different sets to help give them creative ideas for their own writing. This time though they stumbled upon something secret and horrible. A story with a lot of weirdness but also tension and suspense. I really enjoyed it and felt it read like a movie. (4/5)

7. Deducted From Your Share in Paradise (2017) - Eleven strange women rain from the sky into a trailer park which is run like a commune. Everyone thinks they are angels who lost their wings and everyone except the preacher believes they are good. They set about cleaning up the trailer park while at the same time building a strange structure they are painting red. All the residents, except the preacher, have one girl staying with them and the strange noises in the night let our main character know what is going on within those trailers. But he doesn't take advantage of his "angel" instead he gives her a name and teaches her gestures for communication. This has a very abrupt ending and one has a slight hint at what will follow but the entire story is very weird and the purpose of these women is never really determined to be good or evil. A compelling read. (4/5)

8. The Inconsolable (2016) - We start in an hospital room with a man who has just tried to commit suicide and whose long-term fiancee has left him. He goes back to a now meaningless life and tries to find meaning. He spends time with his parents. He starts going to church to see if he can be saved. He starts thinking heavily of the "Footsteps" poem. At the same time, he seems to be collecting birds to him. They surround his house, break his window, peck him. Then something comes to his room one night; is it Jesus or something else? Not bad. (3/5)

9. Dancers (2016) - Beginning just after the exorcism of her husband, Mae contemplates their life together. Feeling the loss of not being able to have children and never getting around to adoption, she contrasts their life with the two oak trees which look like a dancing couple in their yard. Things get a bit freaky at one point and the ending is not finite and yet feels satisfying in a strange way. This story shows off the author's writing skills and appealed to me on some level I can't quite fathom. (4/5)

10. A Thousand Hundred Years (2017) - A man's daughter goes missing while they are at the park and she is on the slide. A couple of months have gone by and he searches for her daily. Then he's given a strange projector which will show him the answers to his questions. A great read with a fast pace. This is my favourite story in the collection. (4/5)

11. Bookends (2014) - This was kind of a hard read as the main character is such a despicable person. His wife has just died giving birth and this covers the next two weeks in which he takes out his anger and grief on the baby. Cicadas are a major theme as a kind of circle of life thing and, thankfully, the ending gives us hope. (3/5)