Are You Loathsome Tonight? by Poppy Z. Brite 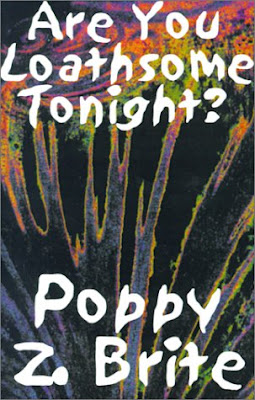 Are You Loathsome Tonight? by Poppy Z. Brite
My rating: 2 of 5 stars


I had previously read a couple of Brite's short stories, one found in this collection, and was interested in reading her more. Obviously, the stories I had read of hers were very tame and not indicative of her style as I really didn't like this collection much. Poppy's writing style is very readable but her topics, no, I should say content is less than to be desired for my tastes. There is a lot of explicit sex which I don't enjoy but don't really have an issue with. What really I didn't appreciate was the violent graphic sex. Violent sex is just not what I want to read. I don't anticipate reading her again unless a short story comes along in a future anthology I read.

2. Arise (1998) - A famous musician fakes his death in 1985 and now he comes out of the shadows when his co-band member and writing partner commits suicide. The musicians' similarity to John Lennon and Paul McCartney doesn't go long unnoticed. Oh, and this is a ghost story, btw. (3/5)

3. Saved (with Christa Faust) (1994) - Not my thing. A story of perverse violent sex with guns filled out with vile blasphemy for good measure. (0/5)

4. King of the Cats (with David Ferguson) (1995) - The introduction to this story calls it a gay fairy tale. It has all the tropes of a fairy tale but there is nothing enchanted about it. It contains both graphic rape and bestiality. Not something I get any enjoyment from. (0/5)

5. Self-Made Man (1997) - The main character, Justin, as the author admits in the intro, basically "is" Jeffrey Dahmer. First, we get his pov as he finishes with one victim and finds his next. Then pov changes to his last victim and we get his story from his days in Thailand, move to LA, and his treatment at the hands of Justin. This is horrific enough, but at this point, the real horror starts where Justin's victims get revenge but a final twist brings a gloomy ending. Very graphic violence; this time the kind I *can* stomach but I did find the whole idea of the story disrespectful to the real Dahmer victims. (3/5)

8. Entertaining Mr. Orton (1997) - A story of a couple who have become bored to tears with each other. One night they complete a murder-suicide. Skip ahead 30 years and a similar artistic couple move in, that's when the ghost of the murdered man becomes cognisant. Not bad. (3/5)

9. Monday's Special (1998) - Very quick little story narrated by a coroner telling of the body that arrived this morning (3/5)

11. Mussolini and the Axeman's Jazz (1995) - The longest story in the book and by far the best. I've read this one before andwish the other stories had been on par with this one. This piece is written straight without the use of sex to shock the senses. In fact, there is no sex at all. An historical piece concerning Archduke Ferdinand possessing a drunk retired policeman who becomes the Axeman of New Orleans. He is out to kill the mage Cagliostro who will change the future for the worse. On the other hand, Cagliostro, hundreds of years old and part of a Freemasons cult is working to make the future a better place, according to him. The ultimate goal is to stop Hitler through the demise of Mussolini. The politics are a bit confusing for me but not paying attention to them the story plays out as a good paranormal thriller. (4/5)

12. Are You Loathsome Tonight? (1998) - I'm not sure what this is. We are given a look at Elvis' last few days and death. Flashes to information about his past: the cutting of his first record, his patronizing a black men's clothes shop in the 50s, his interest in an albino python. Obviously, the connection is between the python and Elvis' constipation. Interesting from an historical point for what it's worth, but there is no plot or climax. (2/5)