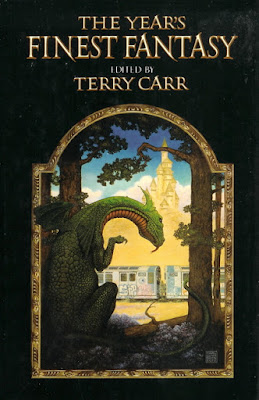 The Year's Finest Fantasy edited by Terry Carr
My rating: 4 of 5 stars
1978


The first in a series of anthologies edited by Terry Carr. A great collection of writers who went on to become quite prolific. Of note, is the first appearance of a Stephen King story not published again until the 2000s. The term "fantasy" is loosely used as some stories venture further into sci-fi or horror. I really enjoyed reading these seventies stories!

1. Jeffty is Five by Harlan Ellison - Jeffty and Donny were friends when they were both five years old. Now, 22 years later they are still friends, Donny is 27 and Jeffty is still five. I like Harlan Ellison and really liked this story. It deals with the past and present, the longing for the 'good ole days' and the price that is paid to live in the past and whether progress is a good thing or not. Great story to begin the collection. (4/5)

2. The Bagful of Dreams by Jack Vance - This is a fantasy set on a planet that has devolved so much past science that they are back to magic. The main character is a trickster and has three adventures on his way home. The first two he gets "had" but at the end, he causes all sorts of trouble and gets back at one who had got him. I've read Vance's short stories before but this one did nothing for me, in fact, I kept looking to see how much longer I had to go. (2/5)

3. The Cat From Hell by Stephen King - An early King story from the late 70s! I hadn't read this story before and I just looked it up and it wasn't published in a King book until the collection "Just After Sunset", which I haven't read yet. A ruthless hitman is hired to kill a cat. The cat turns out to be demonic and just as ruthless as the hitman. (5/5)

4. Black as the Pit, from Pole to Pole by Steven Utley & Howard Waldrop - Excellent! Written in the style of the mid-1800s, this is a sequel, if you will, to Frankenstein. This short novella tells what happened to the creature after he sailed away at the end of the novel. It involves the science of the day regarding life at the centre of the earth. They supposed there were concentric circles inside the planet leading to the very core. The story is reminiscent of other centre-of-the-earth tales with a world populated by dinosaurs, another with apes, one with lava, etc. Most excellent though, is the accuracy with which they portrayed Frankenstein's creature. I've read it several times and could find no backstory information that wasn't correct. The authors must have known the book inside out. This creature is more violent than the one in Shelly's novel because of what happened but he's also a very sympathetic creature like the original. Great story! (5/5)

5. The Kugelmass Episode by Woody Allen - I was quite surprised to see Woody Allen as the author. I didn't even know he wrote short stories and a fantasy at that! In some ways it's typical Allen; the main character is a nervous neurotic little man. He gives up his analyst and replaces him with a magician. The magician has the ability to send a person inside a book to interact with the characters. Kugelmass wants to have an affair with a French woman and Madame Bovary is chosen. His magical bliss soon turns to stark reality. (4/5)

6. Manatee Gal Ain't You Coming Out Tonight by Avram Davidson - I just could not get into this one and it took me several days to read as I would read a page or two and get bored then put it down. Picking up again later the same thing happens over and over. Well, I finally finished it now and can't remember the first half at all. Maybe it was the story or maybe it was just me. I'm giving two stars because I did finish it and I don't think I hated it, it just bored me. (2/5)

7. Getting Back to Before It Began by Raylyn Moore - A story only a few pages long about what we would now call living off the grid. One day a shy quiet young man gets on a bus and decides to follow it to the end, so far along that places don't even have names. Halfway along a shy quiet young woman gets on and sits next to him at the back of the bus. They get talking and end up going to "where it all began" together. Pleasant enough. (3/5)

8. Descent of Man by T. Coraghessan Boyle - Narrated by a man whose girlfriend works at a primate centre. We know right off that they are no longer together and he tells how she started to change over the course of time becoming more primate like, while her prize student Konrad, a chimpanzee, has become an intellectual genius. An abrupt ending but otherwise I really enjoyed the storytelling. (4/5)

9. Probability Storm by Julian Reid - This was really good but also very weird and is hard to explain. Our narrator is from the Other Side. He was once a human and now can flip onto "this" side by briefly entering the minds of people and animals. Very fantastical elements but based on mathematical probabilities and statistics making it feel more science fiction to me than fantasy. A big metaphysical "probability" storm is under way and our narrator gives us the events from his point of view as the storm whips up at one of the probability posts that holds reason together at a bar called Rafferty's. (4/5)