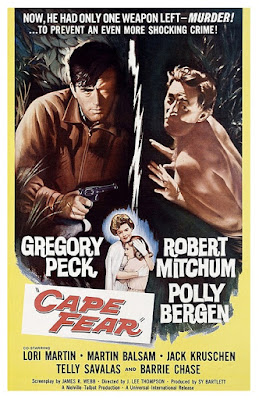 Based on a Book by: John D. MacDonald

Walk on Parts by: Telly Savalas (with hair!)

Small-town lawyer Sam Bowden's life becomes torturous when Max Cady re-enters his life. Cady went to jail for 8 years after Bowden testified that Cady attacked a young woman. Now that Cady has been released, he begins to terrorize Bowden and his family, particularly targeting Bowden's daughter, Nancy. Initially, Cady uses his newfound knowledge of the law (learned in prison) to annoy the Bowdens, then poisons the family dog... Who's next? Written by Chris Holland <cholland@atlantic.net>

Comments: I've seen this before as well as the remake. Having seen this first, I was always of the opinion that it was the better of the two. But it has been so long since I've seen it that I decided to watch them again. This is a classic thriller and quite suspenseful and scary (especially the first time). It holds up well except for some silly slang on Max Cady's part. Mitchum and Peck give stellar performances and I really enjoy Gregory Peck in this role where he really shines and owns the part, though I have always thought Mitchum the better actor. The use of shadows in this b/w film is spectacular and there are a couple of scenes comparable o Hitchcock. in particular where the daughter is being followed/chased through her empty school buildng. Highly recommended and a must see movie.