Tales From The Arabian Nights by Enid Blyton 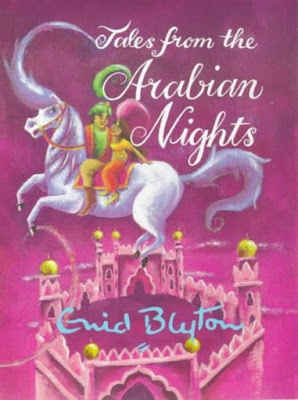 Tales From The Arabian Nights by Enid Blyton
My rating: 3 of 5 stars


A very condensed retelling of six popular tales from the Arabian Nights. As the book is aimed at young readers, 11 and under, one can't blame the book for its abbreviation since that is the whole purpose of the book, to entertain young ones. Blyton was a great writer of good fiction. She's by no means literary but she knows how to write up to young readers, rather than down to them. I've read a lot of various versions of the Arabian Nights and while not close to the best edition available it is a good introduction to the tales and an entertaining one. As far as an adaptation for the target age goes, all the sex is removed and not even alluded to whilst the violence is very watered down to simple statements such as "they cut him into four pieces". I'm a fan of Blyton's and what she did for children's reading during her era.

In a few pages, Blyton first tells the tale of Scheherazade and how she won the Sultan's favour with her tales. Then she invites us to read her retellings of those stories.

1. The Rich Merchant and the Genie - This is three tales in one. A merchant is accused by a mean genie of killing his son by throwing a date pit and hitting him in the eye. He says the man must also die and he will chop off his head. Two old men plead his case asking for half of the merchant's body when he's killed if the genie thinks they have an amazing tale to tell. The first old man who is accompanied by a deer tells the tale of why his wife was turned into that deer. The second old man accompanied by two black dogs tells how his two brothers came to be turned into the dogs. (3/5)

2. The Fisherman and the King of the Black Isles - Another with two stories woven into one. The first part I'm familiar with. A poor fisherman nets a big jar. He unseals it and releases a genie who threatens to kill him. The fisherman cons him back into the jar and exacts a vow from him to make him rich. While fishing at his magic lake the King of the area finds the pond with coloured fish and then sets upon his own journey to discover the truth about this magic lake. This takes him to a cursed king who tells him the tale of how he became half man and half marble. Everything ends well and the fisherman is rewarded. Well-written and a good one for fairy tale fans. (4/5)

3. The Story of Sindbad the Sailor - Sinbad relates his voyages in a total of six different tales. Obviously much is missing from the original tales and Blyton has chosen a unique blend of tales to feature. Of course writing for this young of an audience she keeps the tales to amusing rather than including all the sex and violence. The violence is limited to factual statements such as "he ate my companions." She keeps all the expected monsters/creatures the serpent, the rocs, the cyclops, etc but the rest of them are more survival stories with Sindbad being the only survivor of each tragedy. Amusing and well-written for what it is. (4/5)

4. Aladdin and the Wonderful Lamp - While being rather amusing this is a very abbreviated version which has so much missing, the events have no sense to them. (2/5)

5. The Enchanted Horse - This is a fun tale but is more about a princess than the magic horse. A foreigner brings the wooden horse to the king and shows him how it flys and asks for the princesses hand in marriage in return. The prince jumps on the horse and is taken far away and falls in love with a princess. After returning to his kingdom the foreigner steals the horse and the princess and repeat twice more with everybody planning to marry the princess until she plays mad to escape marriage to a sultan and is rescued by her own fair prince. Different from the other stories this one is much more like a European fairy tale than the other middle eastern tales told here. (4/5)

6. Ali Baba and the Forty Thieves - A very condensed version of this tale. It hits all the major points starting with the finding of the treasure, the killing of Ali's brother and the various attempts on Ali's life. A fun tale especially here as everything happens so fast one after the other. A good choice for the closing story as we conclude with a female servant being the hero of the day. (3/5)