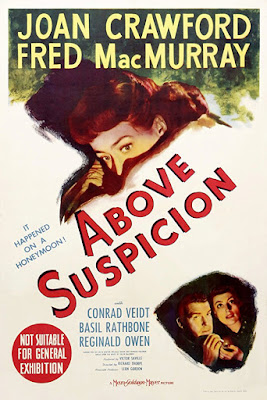 Based on a Book by: Helen McInnes

About to set off on his 1939 honeymoon, an Oxford don is approached by the Foreign Office. Knowing war is near, they need to get information back from an unknown source in Germany and ask for his help, which he readily offers. At first, the American couple find following the secret trail great fun but as they get deeper into southern Germany they realise real danger threatens them both.
- Written by Jeremy Perkins {J-26}


Comments: I loved this. I've probably seen it before. Fred MacMurray was a fantastic dramatic actor. It's too bad my generation remembers him best for his fatherly role in the comedy TV Show "My Three Sons" and today's generation probably hasn't a clue who he is. Lots of suspense. The movie always alerts the audience as to who a suspicious person is before the actors are let in on the plot point which gives a different kind of suspense to the audience than finding out along with the characters. I'm not a fan of Crawford's but she played a good role here with acting that wasn't overly dramatic. Recommended!
Labels: film film noire suspense