Mission: Jimmy Stewart and the Fight for Europe by Robert Matzen 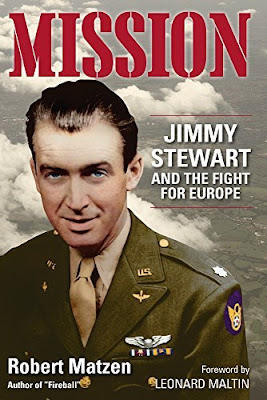 Mission: Jimmy Stewart and the Fight for Europe

by Robert Matzen
Foreward by Leonard Maltin
My rating: 4 of 5 stars


This is a biography or history of Jimmy Stewart's war years of which very little has previously been written as Jim refused to talk about it. Born into a family who had a male fighting in every war since the Spanish-American War, Jim was raised that one day he too must serve his country at war. The book may also be said to be a history of the 445th Bomb Squad where Jim spent most of his active service, ultimately reaching the rank of full Colonel. Matzen has a flowing narrative style which is very easy to read. Stewart is one of two of my most favourite Silver Screen actors and I enjoy war biographies so the book was of particular interest to me. I found the beginning which covers James birth to his early Hollywood days and his joining the service and training days to be the most interesting aspect for me. The rest of the book was too militaristic for me, describing in detail every mission in which Stewart participated. It was interesting but I'm not military minded preferring the social history of wars rather than what is presented here. Even though I enjoyed the book very much because it was about Jimmy, I think the book will be better appreciated by those more interested in the military history than those looking for celebrity information.