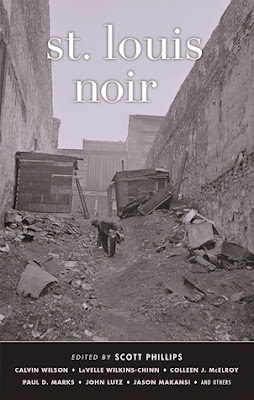 edited by Scott Phillips
My rating: 3 of 5 stars


This is the second book I've read in the Akashic Noir series . I enjoyed it far less than "New Orleans Noir 2". I think having some knowledge of the city these books feature (even if is only from reading or a keen interest) will have an effect on the reader's experience with the book. I knew nothing of St. Louis at all. As a Canadian, I didn't even know what state it was in. A lot of the stories here are about drugs, race relations, vigilantism and politics unique to the city. I'm not interested in these topics, nor am I familiar with them much but a great deal of the stories I wouldn't even call noir. The endings of most didn't use a twist or redemption; if the ending isn't dark I've lost the noir feeling. However, there were a couple of stellar stories combined with the okay stories that the major duds didn't drag down my rating. The book averaged out to a solid 3/5 altogether.

1. Abandoned Places by S.L. Coney - Ian's father takes off. Most assume he's dead. The locals think the professionals offed him. But Ian sometimes wonders if his step-mother of two years killed him. So Ian follows Vickie one night and learns it all. The ending could have been better. (3/5)

2. Deserted Cities of the Heart by Paul D. Marks - This is the tragedy and destruction of a man who meets his femme fatale. An IT guy meets a mousy haired hipster ad his happy but mundane life takes a nose-dive into obsession. Nicely depressing. (4/5)

3. Blues for the River City Colleen J. Mcelroy - There are three black teens and they narrowly escape trouble when sneaking into a whites-only movie theatre. It's the 1950s and mostly just talks about racism; not really a plot to be found anywhere. (0/5)

4. Fool's Luck by Lavelle Wilkins-Chinn - This is the first really good story. It starts off giving background on this African-American family and its quirky members. Then settles on Unk, mentally disabled in the war. Now in '68 the government has sent him a letter saying he'll receive a large settlement since his war work had been the cause of his illness. Now he hooks up with Carla, 20 years his junior, a money-grubbing skank. Nobody in the family likes her, but Unk loves her. She sleeps around etc. and in the end gets hers but not after causing unforgivable harm. (5/5)

5. Attrition by Calvin Wilson - Very short. An A&E reporter is a slacker but good at his job. When a business person is hired as the new editor to get people in line he finds he hates her in a way he's never disliked anyone before. He feels she's bad for the A&E section and we end up learning just what it is that makes him tick. A wicked character study more than plot oriented. (3/5)

6. Tracks by Jason Makansi - This one challenges our perceptions. It's not often we meet a violent female sexual predator in literature. Starting off from the predator's pov we see inside her head, the sick fantasies and then the attack. The end is seen from the victim's pov. Can't say I cared for the story too much but it was unique. (3/5)

7. Four St. Louis Poems by Michael Castro - I hardly ever like poetry even if it's maudlin. (0/5)

8. A Paler Shade of Death by Laura Benedict - This is the first author in this collection I've heard of though had not read her before. Also, this story is twice the length of any others so far. It's a pretty creepy story which never lets you know what has really happened. A woman is moving into a duplex, apparently, she's just gotten divorced, has a restraining order against her going near her old house once she gets her last things moved out today. Oh, her son died some time ago, That's when the marriage started to fail. Now there is a boy across the street who is the age her son would have been now. Is this boy real, a ghost, her imagination? Her son drowned; some people think she killed him. Her ex-husband turns up at her door. What follows is either real, imagined, or a nightmare. (4/5)

9. Have You Seen Me? by Jedidiah Ayres - A man who works clearing out buildings set for demolishment finds a wall of missing posters in a homeless tenement. He starts to recognise some of the kids and has urges to call the numbers on the posters to tell the parents, their kid is ok even if they are dead. When his boss calls him to help him out when he drunkenly kills his girlfriend in a car accident. The boss finds he picked the wrong person. This is pure noir, well-written and keeps you on your toes as it surprised me with where it went. The main character is left being ambiguous so we end up not knowing what he actually is/or may be. (5/5)

10. A St. Louis Christmas by Umar Lee - This is about drug dealers. A vigilante Muslim group whose objective is to rid the streets of drugs hear about a money exchange going down, We learn about Bubba the head of the meth operation and we learn about the backgrounds of the two vigilantes, one Muslim, one Jew. Things happen and the vigilantes, win, I think. I'm not up on all the drug talk or vigilante group names so this was pretty boring for me. Not very exciting, and an ending that made no sense to me. It read well though because of good writing. (2/5)

11. The Pillbox by Chris Barsanti - A naive teenager becomes a skinhead for the uniform and music. Moves to the city, makes a couple of friends, Then he gets involved in drug selling working for "Chicago". Everything is ok until he finds out these skinheads he works for are of the neo-nazi/white pride variety and expect him to join them. He tries to get out of the situation and has to resort to violence. This was ok but again, hard for me to relate to the drug and skinhead culture, having never experienced it. (3/5)

12. The Brick Wall by John Lutz - Now this is more like it. My favourite story at this point. This is the second author I've heard of but again hadn't read before. A good little thriller with a twist ending. The owner of a racetrack enters the current race which includes his friend's son. Someone is killed on the track and the owner is blamed, is sorry, but feels no guilt. A plot is set up to get him making for a tense story, but the twist ending is very good. (5/5)

13. Tell Them Your Name is Barbara by L.J. Smith - This one is about the drug world too but much more enjoyable for me as it involves a murder and the solving of the case. All the characters, good and bad, did drugs so their really isn't a hero here, but the case gets solved and at least one person has the possibility of changing their life for the better. Not a very thrilling ending. (3/5)

14. One Little God-Damn Thing by Scott Phillips - The final story is the editor's contribution and my favourite of the collection. A convict has served his full sentence of thirty years for murder during an armed robbery. He's out now and goes to visit his hometown (where he robbed the bank) not to let anyone see him but to check-up and make sure his sister is ok. He starts by following her husband, the man who was his accomplice and who actually did the murders. Our jailbird had taken full responsibility for the crime in exchange his b-i-l would take care of his sister. Looks like he didn't follow through. This is perfect noir and has a good ending. (5/5)