Buried Alive: The Terrifying History of Our Most Primal Fear by Jan Bondeson 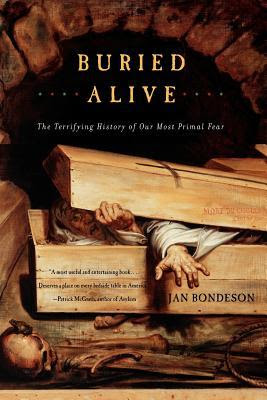 Buried Alive: The Terrifying History of Our Most Primal Fear

by Jan Bondeson
My rating: 3 of 5 stars


This book is not what I thought it would be but that ended up being ok. The subtitle does accurately tell the book's main topic: the history of "the fear" of premature burial. The book is labelled as "Science/Medicine" and is most definitely that. Written in a scholarly manner, dry at times, dense most of the time; it is not a book for light reading. I found the topic engrossing, though, unlike anything I'd read before. The book starts with ancient and medieval times, taking quotes from scholars and scientists of the times but quickly gets to the 1700s where the meat of the book follows. I don't read much history from this time period, nor do I know much of German history which this book mostly concerns. An odd fervour ran through the German medical profession for preventing premature burial. They had many names for this state of "apparent death" and started to work on establishing ground rules for the signs of death. This was also taken up by the French but their revolution interrupted the science giving France a hundred year time period of debate on the topic. England never took to this amusing and grotesque fascination of the Continent. The Germans actually built mausoleum type hospitals for the dead where corpses would be held until putrefaction set in. Up until the early 1800s and the invention of the stethoscope, putrefaction was the only accepted determination of death. Though most of the book takes place in the 1700s and early 1800s the next part deals with the history of establishing rules for the pronouncement of death. It's funny now to think that people were so concerned with whether a corpse was really dead or not, but so it was. My only problem with the book is the author's retelling of practically every myth and fictional story ever published claiming someone had been buried alive. He refutes these and yet fills each chapter with more and more of them. It is only when we get to the last two chapters that being "buried alive" actually becomes the topic. Historical pseudo-cases are refuted and yet the chance of such "accidents" happening is acknowledged. In modern times many cases of mispronounced death are recounted and while premature burial is hardly likely today it still must be taken to occasionally happen in countries where less stringent medical standards are upheld. The author only briefly touches upon 20th-century medical science and the modern acceptance of "brain death", human transplants and organ harvesting. While the author is in full acceptance and writes in favour of current standards, it only went to further strengthen my personal opinions on not agreeing with "brain death" as being a sign of "real" death. And while it is no longer necessary to wait for putrefaction to set in we must (IMO) wait until the person has stopped living without the aid of machines.