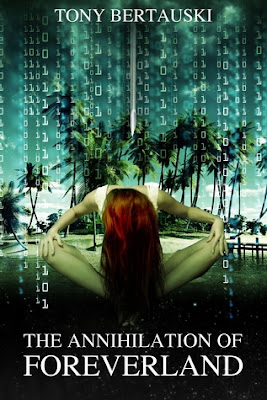 by Tony Bertauski
My rating: 5 of 5 stars


Fantastic YA dystopia! I don't know why I hadn't heard of either this series or the author before, as this is a must read for fans of the genre. I can't really talk about the plot as it is slowly revealed as the book moves forward. We do have a group of boys on a deserted island, their memories have been wiped clean and inserted with many conflicting false memories. They get to do what they want most of the time except they must play video game tournaments and go to classes which are pure discussion, no tests or paperwork. Sounds fun, right? They even get to go to Foreverland where the impossible can happen. But getting to Foreverland is a nightmare. It's an interesting, exciting and somewhat frightening world they live in as the reader along with a couple of rogue boys tries to figure out what it going on. I pretty much guessed by the middle of the book but only the basic concept there were many more secrets to be revealed right up to the end.The writing is great, teen dialogue is realistic. Both the suspense and the pure curiosity of what the heck was going on had me turning pages all day long into the wee hours of the night. Unfortunately, sleep overtook me and I had to read the final 10% as soon as I woke up. I've already added the sequel to my line-up of future tbrs.