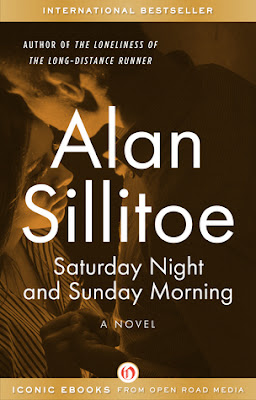 by Alan Sillitoe
My rating: 3 of 5 stars


This is sort of the British equivalent of the depressing Irish novels. I like those Irish books better. Obviously somewhat biographical this short novel takes a couple of years in the life of young 21yo Arthur Seaton. The majority of the book contains Part 1 Saturday Night and tells of Arthur's life as a man about the neighbourhood. He works in a bicycle factory; is good at his job and gets paid well, spending his money on classy clothes. He's a drunk and a ladies man. Most of the action takes place on Saturday nights when he goes pubbing, gets blindingly drunk, has affairs with married women, gets beat up by their husbands and gets into general mischief in the "yard" where he lives being a prankster and having a temper for revenge. Part 2: Sunday Night has Arthur realising at 24yo that carefree days are over, he's working on marrying a woman a few years younger than himself and coming to terms with routines of life when settling down. I felt a certain charm for the book as it reminds me of my heritage, with my father growing up in the same era not far away and hearing war stories from my Gran. None of the characters are likeable as they have internal moral codes they make up as they go along, but family is always strong. A small redeeming factor about the characters. This is a slow read as it plods along with certain episodes happening now and then but there is no real plot, action or climax. Just a slice of life in a 1950s council tenement street full of working class people. Not a thrilling story though I do find a bit of allure from it and will read the author again.