Magic Tales (Told-again tales from many lands) by Adelaide Holl 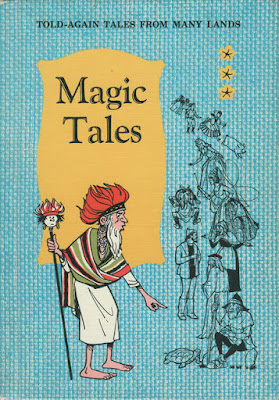 by Adelaide Holl
Illustrated by Pat & Paul Karch
My rating: 3 of 5 stars

Told-again tales from many lands (Grade 3)

As my regular readers know, I read a short story every morning with my coffee. I went for a change of pace these last two weeks and chose an old book of fairy tales instead!

A soon as I saw this book at a used book sale, I had to have it. I used to get the same book out of my elementary school library all the time! In fact, there was a row of these books I read. The book is from a textbook publisher and obviously intended for schools. There are three stars on the cover and spine; markings such as these usually referred to the grade level making this a Grade 3 reader. I googled more information and indeed did find grade 1 and grade 2 exist as do some supplemental readers. These would have been for those finished this grade 3 volume. I haven't rated the individual stories as I usually do with short story collections as these are all written by the same author at a certain reading level. They are well-told but reading level controlled. There are some famous and not-so-famous stories included and the author has taken out any gruesome bits from the originals but not tampered with them much. I really enjoyed reading it as it brought back childhood memories but from an unbiased pov it's not great literature and doesn't even try to be. However it does the job of entertaining the intended audience and I'm personally proof that it (or the series) lead me to a life of interest in fairy tales. The art is nice and typical of the sixties. I'll keep this one for my shelves.

1. The Bojabi Tree (African) - Very traditional tale. All the animals are hungry but the fruit (plums) won't fall from the tree. Then someone remembers that you must say the tree's name to make it give up its fruit. Of course, no one remembers so three animals are sent to the wise man. The first for its agility and the second for its power, but each time they come back they have forgotten the name. Finally, tortoise goes with a trick to remember a long name and though he is slow he accomplishes the task and is honoured by the others.

2. The Wishing Gate (Scandinavian) - Blunder sets off to find the wishing gate so he can wish for two shetland ponies and a red cart. This uses the typical trope of journeying on and asking each creature you meet along the way for help who then each send you off to someone else. Blunder is such a "blunderer" he makes mistakes all the way. And unlike tales of this kind he gets no reward in the end, but of course, he didn't deserve it.

3. The Cat and the Parrot (East Indian) - A fun one I hadn't heard before! Follows the formula of "The Old Woman Who Swallowed a Fly". Only we have a greedy, hungry cat who eats the parrot who invited him for dinner, then an old lady, a man and his donkey, the King's entourage including elephants. But finally, it is little crabs who are his out doing! LOL

4. Cinderella (French) - Very nice retelling. Even though it's been simplified all the original elements have been included with only very minor changes such as Cinderella rushing forward to try on the slipper instead of being hidden and coaxed into it. Of course, the typical scene of the stepsisters trying on the shoe and it simply not fitting is included instead of the gore of Perrault. Since this is the first story that I've read before it gives me an indication of the accuracy of the others.

5. Five Peas in a Pod (Danish, Hans Christian Andersen) - Five peas in a pod have aspirations, except the last smallest one. A boy comes along and sends them into the world with his pea shooter. The fifth pea's story is told.

6. The Flying Ship (Russian) - A nice retelling of the peasant boy who brings the king a flying ship in exchange for marriage to the princess. He picks up passengers along the way who help him with the trick the king tries to play on him.

7. The Golden Pears (English) - The typical fairy tale trope is used here of three brothers who one after another try to deliver pears to the king. The youngest, least clever one is who eventually succeeds winning spoils from the king and setting his first brothers free from the dungeon.

8. East of the Sun (Scandinavian) - A popular tale, it's more often called "East o' the Sun, West o' the Moon". This is a Beauty and the Beast type story, only the beast is a great cuddly fun polar bear. The girl breaks the rules, of course, and then goes off to save her prince by travelling with the four directional winds. A good retelling, only I'd like to know how one can see a man sleeping in bed and know he is a prince. LOL

9. The Lost Ax (Greek, Aesop) - I think this is mislabeled. I certainly don't recognise it as Aesop and secondly since when did he write about woodsmen and fairies? Anyway, a typical fairytale style. An honest man receives his own ax plus gold and silver ones from a fairy in a lake. After telling his story to a lazy man, that man goes and throws his ax in the same lake with very different results.

10. The Monkey's Heart (East Indian) - This is a tale that has been told around the world in different renditions. A greedy monkey wishes he could taste the fruit on the other side of the river, but can't swim. A crocodile hears him and offers him a ride across; halfway there the crocodile tries to drown the monkey because he wants the monkey's heart. In this tale the monkey tricks the crocodile and stays safe, never wishing for what is on the other side of the river again. Other incarnations of the story's main character are mostly not so lucky as in the gingerbread man being eaten by the fox on their journey across the river.

11. The Troll of the Cave (Scandinavian) - Popular tale using the device of three siblings; this time daughters of a widow. Each daughter is tricked by a troll and kidnapped to do his chores. The youngest is the cleverest, of course, and devices a plan for them all to escape and capturing the troll to boot.

12. The Silver River (Chinese) - A tale of unrequited love. A cow shows his cowherd that he is meant to wed one of the maidens forever. After they marry this becomes an origin story as they are a doomed couple and create the Milky Way (Silver River) in the heavens.

13. The Prince of Uppland (Swedish) - Two baby boys are out in a sea chest while the ship goes down with their mothers, the Queen and the cook. Years later the King must decide which is his son and a wise man puts them to a test.

14. The Rabbit and the Monkey (East Indian) - A monkey throws a rabbit into a tree for a prank. A rhino helps the rabbit down and the two go off on adventures. Later rabbit meets monkey and plays a trick on him to pay him back for getting stuck in the tree. The moral is that practical jokesters usually only amuse themselves.

15. Rapunzel (German) - A typical retelling of the popular tale that leaves all the nasty bits out, such as the prince being blinded. This one is all very happy and they trick the witch easily. This is one of those tales where the villain demands the first born child in exchange for punishing the parent.

16. The Straw Ox (Russian) - A straw ox covered with tar catches some fine goods for a poor man and his wife. Rather silly.

17. Snow White (German) - A good retelling of the popular tale with some not-so-familiar elements such as the Queen trying to strangle Snow with some lace before poisoning her with the apple and this tale ends with no kiss. The Prince decides to take Snow to his castle and the piece of apple falls out of her throat awakening her. Interesting.

18. The Steadfast Tin Soldier (Danish, Hans Christian Andersen) - Another good retelling of a classic. It's been a long time since I read HC Andersen's originals but it feels like something is missing from this. However, it keeps the melancholy mood and the not-very-happy ending.

19. The Tinderbox (Scandinavian) - A soldier comes upon a tinder box that summons three different dogs. He gets rich and shares his money with the poor. After what is basically kidnapping the princess every night, he is caught and to be hanged. The dogs save him. Weird tale, I felt the soldier was more of a scoundrel than a hero.