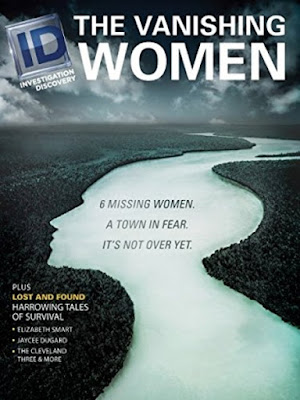 edited by James Ellis
My rating: 3 of 5 stars

A feature magazine about the six missing women from Chillicothe, Ohio since May 2014. I had not heard of this case and ID's presentation is very respectful to the families. In fact, it is also somewhat of an ode to the six women. We are told all about who they were, how they disappeared and in four cases, the finding of their bodies. This is all and well and hopefully, will serve to bring further tips and information to the police. However, from a true crime reader perspective, it is not satisfying as nobody has been caught, no suspect is named and in reality, we don't even know if the six disappearances are related. One is already labelled a suicide though the police are willing to look at any future evidence contrariwise. The photographs show lots of pictures of scenery and architecture mostly. The best part of the magazine from an entertainment perspective for the true crime reader are approx. the last 20 pages which feature other missing women cases, some solved, some not, some rescued, others only bodies found. This part includes Elizabeth Smart, Jaycee Dugard and the Cleveland Three along with other perhaps less known cases. For reading, I preferred ID's previous magazines, but we can at least take heart that this feature may lead to new information coming forth.

PS - The day after I wrote this review Jason McCrary was convicted of the murder of one of the women featured here, Timberly Claytor! Yeah!