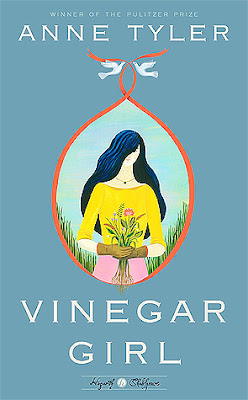 by Anne Tyler
My rating: 3 of 5 stars


I haven't read Anne Tyler before so don't know what she typically writes, however, "Vinegar Girl" is a light romantic comedy much like a Harlequin Romance than anything I typically read. Not really my type of book, but it was a fun story and I liked the characters. Tyler has only kept basic elements of the Shakespeare play. She's played around with the names (Bianca is Bunny, etc) and included some subterfuge (getting married to get a green card) and the Kate in this story lacks social grace (rather than being a shrew). The plot also centres on an arranged marriage though in a much more 21st century way! It's a cute rom-com and would probably make a sweet movie and is certainly great for a beach read. Just not my type of book, though.