The Taming of the Shrew by William Shakespeare 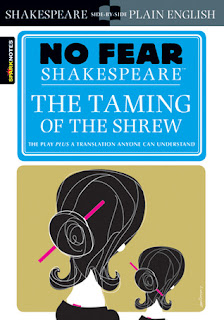 The Taming of the Shrew

by William Shakespeare
My rating: 5 of 5 stars


I'm about to read the new Hogarth which is a retelling of this play by Anne Tyler so I decided to re-read the original play. I love the "No Fear" series as it lets you read the play in modern English.The original is on the left-hand side and the modern translation on the right, which is lightly annotated. This was the first Shakespeare I studied in high school, Gr. 9, and I remember the class having a riot with it so I do have a fond memory for this play even though I detest most of Shakespeare's comedies. I've seen and enjoyed the Elizabeth Taylor movie and have read several children's and graphic retellings so am familiar with this story. What I wondered most re-reading the original play was whether, given its theme, I would find it anti-female or offensive. But it's not. Kate is certainly the star of the play and a smart woman. She is genuinely nasty at the beginning, not only spurning men but outrageously defiant of her father and teasing and torturing (tying up) her sister. Kate behaves like this on purpose though as she is not going to allow herself to follow tradition and be married off to the first suitable suitor, instead she'll have none. But I think secretly she is waiting to meet her match rather than having sworn off men altogether. Petruchio comes along, wanting her dowry money, and seeing her as a challenge. In a game of wits, he and Katherine fall genuinely in love as Petruchio "tames" her by being even nastier than she is to every person he speaks to except her. There is also a servant in the play who acts the fool, using puns and twisting words which make for great comedy, and generally speaking, this is a very bawdy play that would have entertained the masses. One thing I hate about Shakespeare's comedies is everyone pretending to be other people and especially people of the opposite sex. This usually exasperates me. "The Shrew" does use this device and I found it annoying but it's to a lesser degree than in some other plays and is restricted to suitors and their servants switching places plus a fake father is also added. I like Kate and I like her character. Petruchio respects her and at the end, he admits to the others that Kate "allowed" herself to be "tamed". Kate's final speech at the end about how wives should obey their husbands is indeed very 16th century, but I felt her genuine love for her husband comes through as well and it can't really be taken as being anti-female as Kate is only trying to rally her fellow wives to be the best they can be, granted within the confines of 16th century femaleness. I'll say this is my favourite Shakespeare comedy (that I've read) as it's the only one I've even like to date.