The Photographer's Wife by Suzanne Joinson 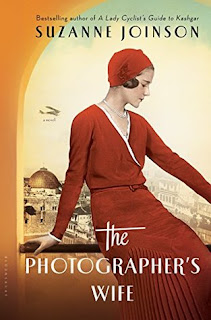 by Suzanne Joinson
My rating: 4 of 5 stars


I loved the author's first book and am happy to say I loved this one as well. The Photographer's Wife isn't about the titular character but instead a young girl who happened to live in the same hotel in 1920s Jerusalem. Two narratives of Prudence Miller are told in this story. First, we meet her as an adult, an accomplished sculptor, living in 1937 England. She gets a visit from a man from her past and then the narration goes back to 1920s Jerusalem when she was 11 years old living with her architect father. This is where the majority of the story takes place with occasional switches back to 1937. I wasn't too particularly into the historical aspect which had to do with British Colonialism in the area at the time, but I enjoy stories taking place between the wars. While the setting was unfamiliar to me, as were the political aspects, I was intrigued from the outset. The book involves many intense topics such as madness, adultery, rape, war and atrocities by those in power but overall the book is more about character than plot. Prudence repeats her past by marrying a man like her father and suffers psychological problems, as did her mother. It's not a happy story, but it is a love story, both of unrequited love and love of Jerusalem itself. Even though a lot happens, there is very little action and I can see why some reviewers didn't like the book. However, I found myself lost in its pages, amongst the alleys of Jerusalem, and tore through the book in a couple of settings. I loved this journey to the Holy Land almost as much as "A Lady Cyclist's Guide to Kashgar"s trip to China and will look forward to Joinson's ensuing novels, wondering to which foreign land she'll whisk me away to next.