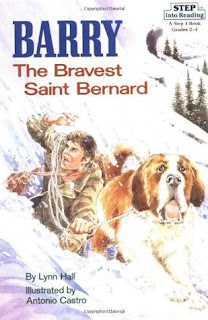 by Lynn Hall
Illus. by  Antonio Castro
Step Into Reading Step 4
My rating: 5 of 5 stars


This is a wonderful true story for early chapter book readers. Obviously, the characters, and perhaps this particular Barry are composites. However it tells an exciting and sweet story of the remarkable Saint Bernard dogs housed at a monastery of the same name, and the monks who devoted themselves to rescuing people in the Alps. Both those lost or buried in avalanches. It became a tradition afterwards to name the finest dog Barry so that there would always be one. This edition of the book has new illustrations, rather than the originals found in the "Garrard Publishers" first edition. The story is current to the 1990s but I've found out that though the monks are still there running a Hospice the dogs became too much of an expense to keep, as there are now modern ways to rescue people and a smaller group of monks were incapable of the daily care of so many dogs. Well-written and will appeal especially to dog lovers as there is some peril, but this is not one of those "dead dog" stories. Too bad it is out of print! Should be made available on Kindle.