The Tomorrow City by Monica Hughes 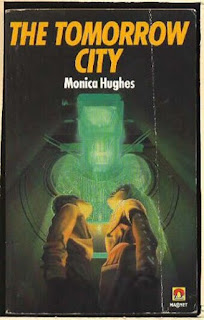 by Monica Hughes
My rating: 4 of 5 stars

This is a re-read for me but I didn't really remember the story, just that Monica Hughes was one of my favourite authors as a kid. For a 1970s science fiction story based on computers, this really holds up well! Set in the not too distant future, a girl's father invents a computer to run their city. The computer learns from itself and inevitably takes control of the city, brainwashing the citizens through TV and spying on them through cameras and light sockets, etc. The city becomes a dystopia with no tramps, low-income families, or old people through unethical means. Citizens become trained to obsessively comply with orders and keep the city clean and running smoothly and efficiently. Since the girl and her best friend, a boy, spend a lot of time way out in a clearing in a forest they miss being brainwashed by the TV and clue in on what has happened and plan to take the computer out. It's the type of story that has been done many times before and since this was written in 1978 but it is a well-paced and well-written tale. The author has not used any technology gimmicks making the story read surprisingly well today in the 21st century. The only outdated idea being that the computer takes up an entire floor of a highrise building. While not among my top favourite of Hughes' books, it is a fun old-school science fiction yarn and indicative of her style.