The Stuff of Dreams: The Weird Stories of Edward Lucas White 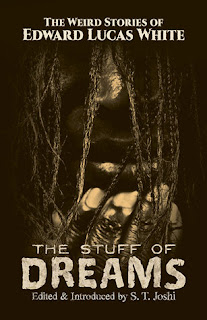 The Stuff of Dreams: The Weird Stories of Edward Lucas White


This is a new author to me and the first few stories did not endear him to me but by the time I'd finished I realised I'd enjoyed more than not and all together they averaged out to a good 3.5/5 rating. He is quite wordy with his descriptions and that is where I thought his downfall was as a suspense writer as it was hard to keep the reader's attention when being bombarded with needless minutia. He did manage to make this work to the stories advantage in some circumstances. After reading the Introduction and end matter I am more interested in finding out more about the author himself than actually reading his other work. His stories were based on his dreams as he was a vivid dreamer. I am also, and can relate to an instance he tells in the afterword of waking from a nightmare and then going back to sleep to finish it!

Introduction - The book starts with an Introduction to the author giving a brief biography, an introduction to his works and discussing his forgotten status in the literary world. Never known for his weird tales, it is they that he is now best remembered. The editor then explains where the stories in this book came from and how he curated them. Not exactly an exciting intro. but since I've never heard of this author before it does a well enough job to introducing me to what I will be reading. All the stories gathered here were written between 1905 and 1909.

1. The House of the Nightmare - A man is cruising in his "machine" and crashes in front of an old house. He meets a boy and spends the night in the supposedly haunted house. It's predictable from the beginning what the shock is going to be so quite a tame story. Pleasant enough reading though I found the writing quite wordy with unnecessary detail. Not an impressive introduction to the author. (3/5)

2. The Flambeau Bracelet - A man gives an accounting of himself after being accused of murder. It's a story from his youth, the justified reason for a duel, with a surprise ending. Very long-winded! (2.5/5)

3. Amina - Finally one that had me going. Taking place in Persia. This starts at the end with the aftermath and some child 'creatures' having been destroyed. Then goes back and tells the tale, how events came to pass and what the creatures actually were. I'm getting used to the author's meandering writing that takes time to get to the point. It works in this story. (4/5)

4. The Message on the Slate - A very long story and the best one so far. A woman goes to see a clairvoyant who confesses to her that he is a fraud; however a dream has brought her to him and he has seen her before in a vision. She wants to open the grave of her husband's dead first wife with whom he is still in love. I liked the writing, this time, it flowed smoothly. He's a wordsmith for sure but the words each had purpose this time. A spooky, atmospheric story. A good ending, but I did figure it out so not exactly shocking. (5/5)

5. Lukundoo - This is definitely a weird tale! Set in Africa, British explorers find a famous one of their ranks is in a nearby village sick and delirious with protuberances all over his body. With a doctor among them, they rush to his aid. They find him near death with an illness nothing medicine can relate too. Pretty gruesome if one uses their imagination to picture the scenes described but also a few parts have derogatory descriptions of African physical features. Another good story, though. (4/5)

6. The Pigskin Belt - Another long tale separated into sections. Starts off quite tedious and as I'm used with this author by now, wordy. Way too much detail goes into the description of building a house for example. Anyway, the first half has the main character use the n-word a lot and the "negroes" all speak as if from a Mark Twain book so difficult to read the dialect. This aside, the Colonel is a liked character by all town members black or white. The story did become engaging in the middle when the author got on with the plot which was why the Colonel was so jumpy all the time, carried two holstered guns that shot silver bullets and had some other eccentric ways. I'm beginning to wonder if this was one of those authors paid by the word as this would have been a better story at half the length but nevertheless, the longer I read the more captivated I became with where it was leading to. (4/5)

7. The Song of the Sirens - Terribly tedious, this took me four days to read while not being any longer than the previous tale. A sailing tale of a story told aboard ship in which the title tells us who (or what) the sailors meet. Three-quarters of the story are spent in description mostly not pertinent to the plot, then near the end, the titular tale is told. Boring! (0/5)

8. The Picture Puzzle - Finally a good story that I really quite enjoyed. It's actually a happy ending but has a paranormal element and the story flows well from beginning to end. The story of a miserable couple whose four-year-old daughter has been kidnapped. The only problem (and a big one when read in the 21st century) is that the story's logic is marred by prejudice, being attributed to "ignorant", "stupid", "jabbering" immigrants. (4/5)

9. The Snout - Perhaps the longest story at this point and the best one. A man recounts an unusual tale. He and two other thieves had robbed a recluse billionaire's mansion and the story is a full description of everything they found inside the estate. White's penchant for excruciating detail is put to good use here as each room is described of its contents and the further they go into the mansion the more and more we know that the sole inhabitant (excluding his manservant) is abnormal. Right from the beginning I was trying to guess what it was that the man had seen and I started off wildly incorrect but gradually got closer to the truth as did the thieves as they neared the recluse's bedroom. But just what he/it was, even when revealed, is left mysterious. (5/5)

10. Sorcery Island - Another enjoyable story. This is indeed a "weird tale" but not scary or creepy. A man recounts how he crashed on an island where he met a man he went to school with. The man had made the island his personal private island complete with a small inhabited European village, an Asiatic village of servants and a wildlife preserve. The man describes how he manages to escape once he realises no one is there entirely of their own free will. (5/5)

13. Edward Lucas White on Dreams: "Preface" to The Song of the Sirens (extract) & "Afterword" to Lunkundoo and Other Stories (extract) - Interesting to get the author's perspective. I'm also a vivid dreamer so I can relate. No rating.