The Loneliness of the Long-Distance Runner: Stories by Alan Sillitoe 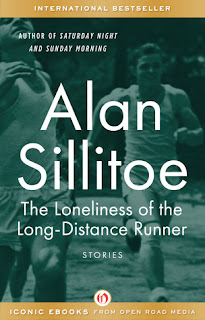 The Loneliness of the Long-Distance Runner: Stories


A collection of stories with the running theme of life for the working class British man pre & post-WWII. The main focus of each piece is a character study, with their being little to even no plot. I enjoy character stories and they are well-written gloomy fare but still I must admit they just really didn't do anything for me as a whole. Fortunately, I understood the historical and societal era the tales depicted as this is where and how my father grew up. Even though the book has a brief biographical afterword about the author I do wish there had been an Introduction which introduced us to his writing.

1. The Loneliness of the Long-Distance Runner - A novella taking up 29% of the entire book, this story has no plot but is the running commentary of the thoughts of a 17yo in an institution for juvenile delinquents as he trains for the annual sports day competition representing the institute as their long-distance runner. I'm guessing this takes place in the late 1950s, the youth contemplates on why he will always be of the criminal element, doesn't ever plan to change and is quite proud of the fact. His thoughts all have to do with the British class system and his contempt for anyone in authority or "lords and ladies". I didn't care for the youth at all as he was a petty thief with petty ideas of "sticking it to the man." That said, the story made me think of my dad who I do respect greatly and was by no means ever petty nor a criminal, but he was raised the same as this youth. My dad was born during WWII in Yorkshire and this youth used some slang making me think he came from the same region. This youth was a Teddy Boy, as was my dad though for him it was more of a fashion statement than the accompanying rebellious behaviour. This youth's family were working class and the father died of cancer contracted from the factory industry he worked for. My father's family was the same and *his* dad died of lung cancer caused by working in the textile mills. A well-written story which touched me in a certain personal way but I didn't particularly like or agree with anything it was trying to say about man and society. (3/5)
PS - I've since learned these stories take place in Nottingham, which is south of Yorkshire, but the characters use a lot of words and turns of phrase I'm familiar with.

2. Uncle Ernest - A character study. A depressing story of Ernest, an upholsterer, survivor of WWI, suffering from shellshock but no one knows not even him. He lives a lonely life, working which he's successful at, and spending the profits at the pub, he's always dirty. He has no reason to live, thinking of his drudgery of life, no friends, no family. Then one day two hungry little girls come into the diner where he eats lunch and sit at his table. He feeds them and it becomes a regular affair, the elder of the two is aggressive and takes advantage of him eventually getting presents for themselves as well as food. But Ernest is simple and now has a reason to live, he loves these girls like daughters, they are the light of his life. People begin to notice and one day the police come to him saying they've been watching and tell him it isn't right for a man his age to be giving money and presents to little girls. He must stop and never see them again or he'll end up before the magistrate. So Ernest turns dim and walks back into a pub with the glasses of ale welcoming him back. Well-written gloomy study of a typical type of man from this time in Britain. (4/5)

3. Mr Raynor the School-Teacher - This story looks at Raynor, a teacher who sits on his high stool looking through the window lusting after the drapery shop girls across the street. It's no secret as he tunes out his class often. He is particularly remembering an 18yo who left a few weeks back as she was killed. Raynor occasionally returns attention to his current class of final year 14yo boys and eventually straps the most belligerent one which turns into a tussle but Raynor holds his own and maintains an order for his class. Raynor is certainly not likeable, but he is probably a common example of a teacher from this era and place in Britain. We come to note that as a teacher he understands his boys and isn't a bad teacher when all is said and done. There is also plenty to think about regarding the girl and her death. (4/5)

4. The Fishing-Boat Picture - A sad story of love that takes place before WWII. A young couple marries; the woman is headstrong and cocky while the man is a nonconfrontational reader. They argue a lot and six years later the woman runs off with a painter. They remain legally married. Ten years later she turns up at his doorstep, characteristically changed and visits him once a week thereafter during the war until her death. He became happy in his quiet way after she left him but after her death, he finds out the suffering life she lead during those years. He examines their relationship, and love, and perhaps how they could have done something to make it work. A bleak but soul-searching story. My favourite so far. (5/5)

5. Noah's Ark - Two boys with only a few pence set off for the fair that's arrived in town. We learn a lot about the boys and their backgrounds as they walk along. Once at the fair, the streetwise boy shows the other all the tricks to come up with money at such an event and they steal, find, trick, and beg themselves enough to have a great day. The Noah's Ark is what we commonly refer to as a carousel and the one shows the other how to ride it for free. This is the main thing the most honest boy had wanted to experience at the fair.He get's on the ride but the attendant is onto him and chases him the entire ride. Everything ends well, but it leaves you with a bittersweet feeling that people make the most of what they have, but dishonesty gets its just reward in the end. (3/5)

6. On Saturday Afternoon - This is about a man who tries to hang himself. But it's actually about the narrator reflecting back on an incident that took place when he was 10 years old and he watched, even abetted, a stranger trying to hang himself. We know little of the man but get to know the narrator's life and circumstances, working class poor. We learn a lot about the narrator's dad, the family's anger and lot in life. It's illegal for this man to have tried suicide and he is arrested, sent to hospital, because his life is not his own, The narrator disagrees about this and makes a case. I disagree as our lives are certainly not our own, they belong to God, and while not a cause to be arrested anymore, suicides should be treated with mental health resources. I did like the narrator's reasoning on why he would never kill himself because of his "stick-to-itiveness". Well-written, a good gloomy topic but again I don't agree with the sentiment it tries to make. (4/5)

7. The Match - Most of the story rambles on about a "football" match and the home team loses like they always do. The two mates talk about it as they walk home; they live next door to each other. One is newly married, in love with a pretty pregnant wife. The other, Fred, has three children ages 14 and down. The last bit of the story describes the domestic unrest and abuse going on in the home as his friend and wife hear the ends of it next door. Too bad all the sports just zoned me out on this one. (2/5)

8. The Disgrace of Jim Scarfedale - Well, this is a sorry meandering story that narrates certain events and the eventual outcome of Jim Scarsdale by a 15yo neighbour who spied in a secret cranny to hear every word that went on in his house. Jim was a mamma's boy, tied to his mam's apron springs who one day in his 40s announced he was getting married. It only lasts six months and he returns home to mamma. But what happens to him in the end, is a shocker. Quite a bit of social commentary and eventually focussing on whether his upbringing connects to his crimes in the end. A bleak story but I probably enjoyed this as much if not better than "The Fishing Boat Picture". (5/5)

9. The Decline and Fall of Frankie Buller - This a sad story of a mentally challenged man-boy. W e don't know what's wrong with him. The time is between the wars and his father won a medal in WWI and was returned shellshocked. Frankie, clearly 10 years older than the neighbourhood 15yos is obsessed and fascinated with war. He's a good tactician and leads his gang into victory over other neighbourhood gangs. The narrator was one of those 15yo boys. He then tells us of meeting up with Frankie again when he visits home, the final time realising Frankie has had electric shock therapy. I like depressing stories like this but felt disconnected from not getting any sense for the characters. (3/5)

10. A Biography of Alan Sillitoe by Ruth Fainlight - Written by Sillitoe's widow, this is a brief biography of the events of his life. There are pictures included. However, it sheds no light on his stories or his writing. I'm assuming there may biological elements as before WWII he quit school at 14 to work in a local factory. (not rated)