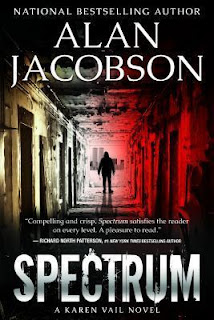 by Alan Jacobson
My rating: 5 of 5 stars


This is totally 100% excellent! I loved it! And I loved the way it was written! This is Karen Vail's origin story going back to the 1990s when she was a rookie and her first day on the job. She shows up at a crime scene which turns out to be the first work of a serial killer that Karen will end up chasing for the next twenty years. The book starts off with alternating chapters between a crime taking place in the 1970s and Karen's work in the 1990's. Karen's story then progresses straight through the 2000s to the present day. What is absolutely cool is that chapters hit upon her checking in with this serial killer case while she's on the job with cases we've read in the previous five Karen Vail books! Every character we've met to date through the series is either a major character or does a cameo making this book just a whole lot of fun to read. The case itself is good: Greek women are being found displayed in a provocative manner with their fingers superglued into position, eyes slashed and a piece of glass stuck in the neck. It's a wild ride with plenty of action, lots of profiling and real-life FBI profiler Mark Safarik shows up as himself, too. Really enjoyed this!

Jacobson has Vail taking part in his other series about terrorists, conspiracy theories and black ops; while the characters from that series make appearances in the Vail books. I hope he continues on writing strictly Karen Vail books, though as the other series doesn't appeal to me.