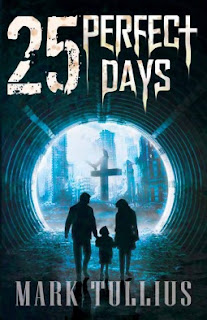 by Mark Tullius
My rating: 4 of 5 stars

A fast-paced dystopian set in a future where a religious cult and the government are in cahoots and control the world (or at least North America). Written as a series of vignettes, each one taking place further and further into the future. The stories contain some of the same people and generations of the same families with the book beginning at the start of this cult becoming popular and ending with a completely totalitarian society and an underground movement set to take it down. Because of the episodic nature of each chapter the book has no character development nor characters who stay around long enough to become attached to so that is one thing I missed as I am a character driven reader. However, it's a unique device to tell a story and I was well invested in this nightmarish dystopia which had many possibilities that could become realities if present day society continues on its present course. Of course, there are many far-fetched elements also but altogether it presents a plausible, frightening look into a bleak dictatorial future where one power controls the people's lives. The book was well-written and a page-turner. I'd read more from the author.