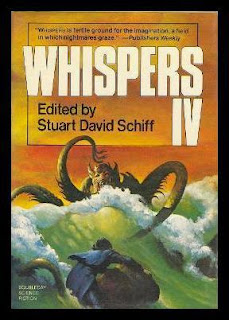 edited by Stuart David Schiff
My rating: 4 of 5 stars


This is the 1983 anthology for the magazine "Whispers", a collection of up and coming horror short story writers. All the stories here are copyrighted 1982 with 4 of them being previously published in the magazine while the others were curated for this anthology exclusively. This was a very rocky read for me. I had read 4 of the authors before but hadn't even heard of the others. Several of the stories were great but the stories meandered on down from less than great, to ok, to more than one that was a zero-rated dud. But those great ones sure had something going for them because after all was said and done the stories surprisingly averaged out to a solid rounded-up four. A wild and crazy ride.

1. A Night on the Docks by Freff - Delightful story to open the anthology with! Taking place in a time long ago a village is suffering a wasting disease, they only know it must have something to do with a shipwreck off their shores a few days ago. All the children feel something hanging over the village but one can smell an evil and identify it so he goes to the prince of the dockrats. A council is called and all the village children: rich, middle class, poor and orphans meet on the docks to hear the tale and plan to find the evil and destroy it. A reverse on one of those stories where the evil infects all the children in a town, here they are the saviours. Stories with kids are always creepy. Good first story. (3/5)

2. Into Whose Hands by Karl Edward Wagner - Oh, I loved this one! A favourite topic of mine! All about the goings on in a psychiatric hospital under the weekend shift of Dr. Marlowe.(5/5)

3. Out of Copyright by Ramsey Campbell - An unscrupulous anthologist rips off a widow when purchasing her late husband's book collection because of a rare first edition of short stories never reprinted in its entirety by a famed Gothic writer. He gets his in the end, obviously. (3/5)

5. Come To the Party by Frances Garfield - People can't find a house in a rural setting for a party and eventually stumble upon an eerie party in a gloomy old house. Pretty lame. (2/5)

6. The Warrior Who Did Not Hear by Gerald W. Page - The longest story so far, dived into chapters but not a novella. A medieval-type warrior fantasy. Took a bit for me to get into then a curse is cast upon the main character and it gets a bit spooky but not really very exciting. Just ok. (3/5)

7. Fair Trade by William F. Nolan - This is an ode to the old EC horror stories. A corpse rises from the grave to exact his revenge. Short and sweet. (4/5)

8. I Never Could Say Goodbye by Charles L. Grant - Loved this! I've always wanted to read this author's novels but so far, have only sampled a few short stories. A bit difficult story to summarise without giving anything away, but a melancholy story, and a dark one including loneliness, murder and ghosts.All done in the name of companionship and family. A bit eerie. Good story.(5/5)

9. The Devil You Say! by Lawrence Treat - After seeing Faust a third-rate ball player makes a deal with the devil, not for his soul but for his wife. He soon realises his mistake and figures out a way to cancel the deal. Hardly a horror story but clever. (3/5)

9. Diploma Time by Frank Belknap Long - A tale of a man with a violent temper and subsequent blackouts and paranormal revenge. Good one. (4/5)

10. Tell Us About The Rats, Grandpa by Stephen Kleinhen - A man is checking out his widowed daughter's new man for approval and during the visit tells him and his grandson's a creepy story. Quite chilling! (5/5)

11. What Say the Frogs Now, Jenny? by Hugh B. Cave - A waitress walking home at night. This has a bit of everything. Lonely dark roads at night, murder, revenge, and ghosts. (5/5)

12. The Beholder by Richard Christian Matheson - Very creepy. A man (or perhaps he's more) uses a special set of paints to capture the very essence of young women. (5/5)

13. Creative Coverage, Inc. by Michael Shea - This is the longest story so far, divided into sections and what I'd call a novella. It takes a real-life tragedy that had happened a few years earlier (which takes the reader a little while to figure out what it is) and puts a nefarious pre-planned big drug company conspiracy theory behind it. The ending wasn't that satisfying, otherwise good. (4/5)

14. The Dancer in the Flames by David Drake - My favourite! A soldier in Cambodia is doing a little stunt by sparking a small piece a napalm which burns briefly but in it he sees a woman who looks like a Cambodian woman he saw get accidently burned in a village they napalmed. This woman calls out to him in French to come to her. Is this his guilt? Must surely be? But the twist ending is oh so wonderfully out of left field you 'd never see it coming and amazing. Freaky! (5/5)

15. The Reflex-Man in Whinnymuir Close by Russell Kirk - This is a longer story set in about the 1600s, pseudo-written from remaining pages of a manuscript so it's rather old-fashioned language and about ghosts or witches or perhaps both, I don't know. I've tried to read it three times now and my mind just will not focus. Too dry and boring for me. (0/5)