Smoke Gets in Your Eyes: And Other Lessons from the Crematory by Caitlin Doughty 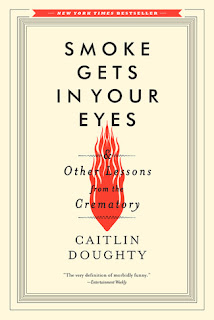 Smoke Gets in Your Eyes: And Other Lessons from the Crematory

by Caitlin Doughty
My rating: 3 of 5 stars

3.5/5. I bought this after reading a couple of memoirs on the funerary and undertaking business wanting more about the cremation end. Plus I'm just very interested in death and funerary practices. The book was very interesting though did contain a lot of repeat information for me. The author spent an awful lot of time on embalming which I think I would need to be there physically to learn anything new at this point. Her details on cremation were by far the most interesting parts of the book as was the medieval death history which she majored in at college. She believes in western society going back to being comfortable with death and giving up on the pomp and circumstance of funerals. She believes there needs to be some sort of ritual one believes in surrounding a death ceremony and it is on these counts I agree with her even though she is a secular humanist and I am a devout Catholic. I like her ideas and love the idea of combining the traditional natural death burial practices with the already practiced Catholic Funeral Masses; cutting out the funeral home services and upselling would put us back to a starting point of free to low cost funerals. The only thing I was disappointed in was the promised humour. I didn't think she was funny, at all and I love dark, gallows humour. Just not hers, I guess. Secondly, while her information was interesting, as a memoir she doesn't have enough experiences to reflect upon maturely enough. I told myself this last time I read a memoir by a young person, but I have to remember not to read memoirs written by 23-year-olds. Even though I haven't reached the age yet, I think a person should have lived at least half a century before they have experienced enough to reflect on life. I'll be keeping this for my collection of "death" books though as it's the only thing I have specifically on cremation and it is a good read, especially if you are entirely new to the subject.