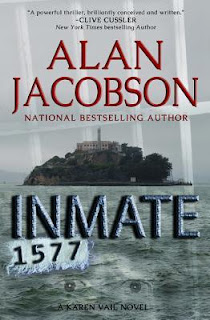 by Alan Jacobson
My rating: 5 of 5 stars

It's been several years since I read book three in this series but it only took me pages to remember why I liked it so much. Karen Vail is a fantastic character, very sarcastic and not very likable but smart as a whip. She's an FBI Profiler called out to California to work on a serial killer case involving an unsub who tortures and violently rapes elderly women then kidnaps, kills and displays the husbands at tourist sites. Bodies are racked up faster than the coroner can get them to the morgue and the killer starts sending Karen personal texts. What's cool with this entry is it has tie-ins with the infamous 1962 Alcatraz escape and flashbacks every other chapter to the 1960s following a fictional inmate who is wrapped up with the historical characters and events. A fast-paced, action-packed thriller with twists and turns that keep you guessing until the end. Loved every word! I'll be continuing on with this series soon.