Fatal Jealousy: The True Story of a Doomed Romance, a Singular Obsession, and a Quadruple Murder by Colin McEvoy & Lynn Olanoff 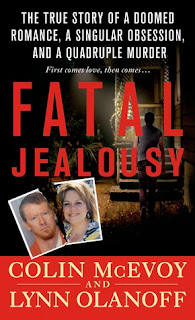 Fatal Jealousy: The True Story of a Doomed Romance, a Singular Obsession, and a Quadruple Murder

by Colin McEvoy & Lynn Olanoff
My rating: 3 of 5 stars


An intriguing read about the life and crimes of Michael Ballard, a mass murderer, who killed four people at once and had one further convicted murder he had served time for, committed in his late teens. The authors give emotional character portraits of the victims through the words of family members which is a compelling technique and appreciated in a true crime novel. There is nothing sensationalistic in this portrayal of the case even though at times it does give a fair accounting of the nature of the violence. The authors do have an agenda though and I found that not to my liking; I prefer to read unbiased accounts of crimes. The authors set out to use this crime as an example of the need for parole reform in the state of Pensylvania. There are some chapters which give the history of failed cases of violent offenders who were paroled only to kill again. Micahel Ballard fits this profile. I give them props for going into the full neuropsychological exams of Ballard and while legally sane he was also extensively brain damaged. The authors' agenda was to prove that Pennsylvania is lax in giving death sentences and Ballard's death penalty was a win for the people. Thus, their book ends with that sentence. More on the aftermath would have been appreciated. An unbiased approach would have discussed whether extensively brain damaged people *should* even be put to death for their crimes. Sane people (which Michael was/is) are responsible for their crimes but a book like this that actively comes across in support of executing all violent offenders regardless of mental health comes off cold and unbalanced in its representation of the "truth".