Blood in the Soil: A True Tale of Racism, Sex, and Murder in the South by Carole Townsend 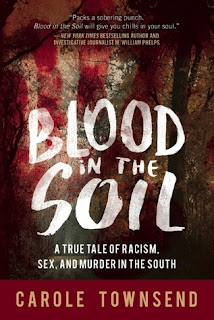 Blood in the Soil: A True Tale of Racism, Sex, and Murder in the South

by Carole Townsend
My rating: 4 of 5 stars


A good read if a bit unorthodoxly written for a true crime. This is the story of Joseph Paul Franklin, the man best known for shooting pornography king Larry Flynt, but he was a genuine serial killer by the time he added Flynt's shooting to his roster. The book is about Franklin but Flynt's shooting does take up a chapter and beyond that point can't help but become a major part of Franklin's life story. This was a totally fresh introduction to a serial killer for me as I'd not seen the movie made about Flynt some years ago. Franklin was a racially motivated killer, a brutally abused child who tried to find somewhere to belong. He first tried Christianity but could only settle on the Old Testament God, his hatred for Jews conflicted with that moving him on to neo-Nazi groups, the KKK, and the like but found them all talk and no action. He then found his mentor and mission when he read Mein Kampf and decided to eradicate all mixed-race couples, blacks, and Jews. He didn't mind pornography per se, but Flynt hit his list when he started featuring mixed-race couples in his "filthy" magazine.

The author interviewed lead Detective Michael Cowart extensively and with his permission, writes this book from his point of view, alternating with chapters written in the all-knowing perspective about Franklin, often, the author admits, putting thoughts into his head, which she feels justified doing from her extensive research of his letters and interviews. This, of course, has to be taken with a grain of salt, but it is compelling and makes for interesting reading. Frankin admits to killing 22 blacks and jews and it was ultimately the conviction for killing a Jewish man in a death penalty state which saw him put on death row and legally murdered by the state by lethal injection in 2013. Worth a read, especially as an introduction to the case, if you're unfamiliar with Joseph Paul Franklin as I was.