A Mind of Winter by Shira Nayman 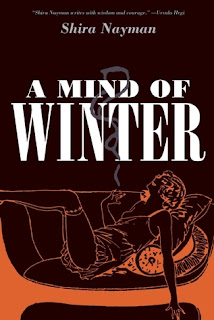 A Mind of Winter

by Shira Nayman
My rating: 4 of 5 stars


I liked this book. I really didn't know what I was getting into when I started as the publisher's description of a "literary psychological thriller" gave me visions of something this is completely not. I was very smitten, though. The book is indeed literary and psychological but there is no thriller. There is a secret which is easily put together by the reader if not during, then certainly by the end of part one. I'd say the main theme here is misconceptions. Coming to your own conclusions about people and then acting upon those misconceptions without ever gathering the courage to face the truth until it's too late. This is historical fiction set a few years post-WWII (1951, to be precise) with some flashbacks to the war years. It's told from different narrative points of view that don't come together until the final part.

First, we're introduced very briefly to Oscar. He has a problem and a secret. This is the mystery of the whole. Part One then takes us to Shanghai and is the story of Christine, opium and child prostitutes. She mentions Oscar occasionally. Part Two goes back to America and is the story of Marilyn, who is a regular visitor to Oscar's weekend country parties. Oscar is never the main character, though. Barnaby is. He plays a major role in Part One and Part Two, being the lover of both Christine and Marilyn. Part Three is Oscar's story which brings everything together.

The psychological character portraits of these deeply disturbed people are what drives the book. The plot is interesting but I easily figured it all out before it unraveled. What kept me going after part one was to find out what happened to Christine as she doesn't come back until Oscar's story brings everything together again. This is a dense book and wasn't an easy read for me, meaning it was slow. Not because I got bogged down or anything but, honestly, I think because there are few chapter breaks. I didn't find the book exciting and yet I found it intense. Since it is told in a nonlinear storytelling I wouldn't recommend it unless you're used to that type of narrating. Myself, I'd like to read her other works. One other novel and a collection of short stories.