Triptych: A Mystery by Margit Liesche 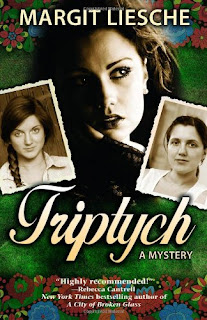 by Margit Liesche
My rating: 4 of 5 stars


This is a small unassuming book that packed a huge wallop. The title "Triptych: A Mystery" and the photoshop cover don't really do justice to what I found sprung emotionally upon me from amongst its pages. An overpowering, heartfelt story on a theme I am deeply interested in. The escape and survival of victims of communism the world over but especially from the cold war. I had not ever read about Hungary's "liberation" by the Soviets but have read extensively about Poland's fight for freedom from their Soviet "liberators". Heart-wrenching stuff and Hungary's tale is no less brutal. Imagine waiting for the Nazi's to leave your country and to be freed and liberated from the Fascist rule, concentration camps, etc. only to have the Communist Soviets come in behind them to enslave you, send you to work farms, teach your children to spy on you, etc. 1956 was the year Hungary choose to fight back, it lasted 3 weeks and thousands of Hungarians died on both sides before the Soviets took back control and the freedom fighters paid the ultimate price.

This story goes back and forth in time from the Hungarian Uprising in 1956 to 1986 in which a daughter from the present Cold War time goes back to Hungary to find out what happened to her mother's twin sister who disappeared shortly after the Uprising when she was arrested at night and never seen again. The characters are wonderful and the pacing switching from the past to the present is seamless. Telling the history of the Uprising through remembrances and as it happens. Mostly the book is historical fiction, but around the 65% mark a murder happens and the pacing changes to that more suited to a mystery and the daughter, Ildiko, goes on a chase to track down the murderer. I must say my reading speed increased suitably to the pace. This part wasn't difficult to figure out as the whole story had been leading in a direction that made me feel something was going to happen. It was a very satisfying read, on a topic I'm thrilled to have learned more about, well-written, with great characters and a tightly woven plot, plus a tiny bit of a fun romance in there too. I'd recommend it more for the historical aspect than the mystery but the two do go together well.