The Thirty-Nine Steps by John Buchan 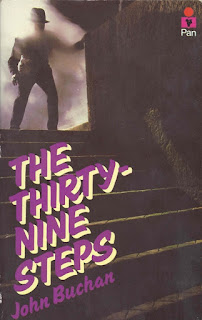 by John Buchan
My rating: 1 of 5 stars


I thought this would be fun, having seen the Hitchcock film numerous times but it was an utter disappointment. I had to really force myself to finish the book. It followed a chapter by chapter formula of Hannay on the run, meets with character, gets fed, gets new disguise, talks about case, gets sent off to next person who will help him on the way. Next chapter, repeat. Each chapter title even tells you who he is going to meet: The Adventure of the Literary Innkeeper, Radical Candidate, Spectacled Roadman, and so on. It was very tedious reading and I honestly kept forgetting what the plot was each time I picked up the book. Even though it's such a short book I had to take it in small bites. I'm the last person to judge older books by modern sensibilities, but even I found its flippant empirical racial quips hard to swallow including coming from the time it was written. "'I haven't the privilege of your name, Sir, but let me tell you that you're a white man." Anyway, it was boring and I can't see myself ever picking up a book by Buchan again.