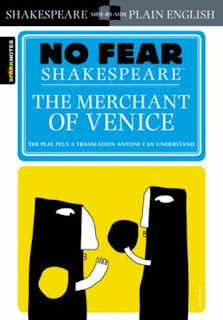 The Merchant of Venice (No Fear Shakespeare)

by William Shakespeare; edited by John Crowther
My rating: 3 of 5 stars


The Merchant of Venice isn't new to me. I read the original in Gr. 9 English class, I've seen the play performed at Stratford, I studied the play with my son when we homeschooled for his Gr. 9 year, and I've watched a filmed British production. Plus I've read several children's retellings and graphic novel adaptations. I chose to read the original again though because the next book I'll be reading is Howard Jacobson's latest novel, "Shylock is My Name", a modern retelling of the play. I really enjoy these "No Fear Shakespeare" volumes from SparksNotes which have the original play on the left and a modern English translation on the right with annotations. I read the modern translation as I'm not fond of reading Shakespeare in the original middle English; I've read about a dozen plays and feel like I've done my time. Any Shakespeare reading I do now will always be modern translations like this where I can look at the original if I feel the need.

I don't particularly like "The Merchant". It's a nasty story with no likable characters. Everyone is selfish and mean. I also do not like any of Shakespeare's plays that have plots that involve men and women dressing up as the opposite sex to pull pranks on their lovers for stupid reasons and nobody recognizes them. I find these plots absurd. I hate the Portia and the three caskets storyline. There is a lot of bantering going on during this play and I take it that it's considered as one of Shakespeare's romantic comedies though it is rather uncomfortable to find it funny what with the racism and general meanness of everyone concerned. Shylock has sympathetic moments, he's lived a life of racial abuse (for being a Jew) and he has his famous speech "If you prick us do we not bleed", (which I actually did take time to read the original text) but he doesn't do himself any favours since he's downright nasty to everyone including his daughter. But then every single other person in the story is just as nasty with no redeemable moment including his daughter who elopes with a Christian but first steals a lot of precious jewels from him including ones with sentimental value. So, yeah, no love for this play. I am looking forward to Jacobson's novel though as it is going to focus on Shylock and his daughter's part of the plot in a modern setting.