Shylock Is My Name by Howard Jacobson 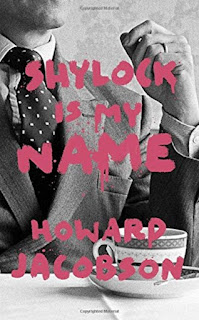 Shylock Is My Name

by Howard Jacobson
My rating: 4 of 5 stars


This is the type of book that requires a critical essay rather than a review, but that's not what I do; so some thoughts on how I found the book so readers can determine if it will be for them. I re-read "The Merchant of Venice" before reading this book and highly recommend you be quite familiar with the play or there's not much point in reading Jacobson's retelling. This is a short novel, but not a page turner as it is very heavy and literary. However, I did enjoy it very much; finding myself eager to pick it up each time. The story is also full of satire and black humour which lightens the primary dark theme of antisemitism. There are two storylines running concurrently one involving the Jew Strulovich (Shylock) and his daughter who is running around with a Christian, the second concentrates on Plurabelle (Portia) and her androgynous best friend D'Anton (Antonio). I fell in love with the Plurabelle/D'Anton story right away and found that the best part! But eventually, the two stories do merge into one. There is a magical realism to the story as Shylock the literary character from the original play is also a character in the story and it's up to the reader to decide for themselves just how he fits in. Shylock spends most of his time analyzing his character's past action and behaviour while counseling Strulovich on the nature of being Jewish. I found it amazing how many plot elements Jacobson actually included in his book from the play. I'm actually not a fan of this play and enjoyed the novel much more. Shylock becomes a sympathetic character while Strulovich isn't exactly likable but he is relatable to and it was quite meaningful to have Shylock speak Portia's mercy speech at the garden party. This is definitely a thinker's book and intended for readers' who know the play. I did guess what the pound of flesh was going to be quite early but the way it all turned out at the end was quite clever and satisfying!