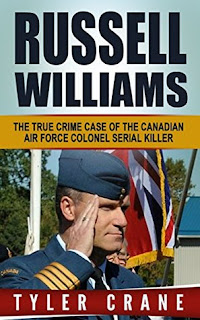 by Tyler Crane
My rating: 5 of 5 stars


A short but well-written, detailed walkthrough of the shocking Russell Williams serial rapist turned killer case. This was a truly staggering crime for Canada when it came to light that such a long-term, decorated career military man could live a double life as a deadly degenerate, the country was astounded. Crane has put the case together chronologically starting with who Crane was and his sudden flip to the dark side. Crane writes well, though not in a narrative style but more journalistic. Factually he's presenting no more information than one could find scouring all the newspapers but here it's put together in a natural cohesive order with asides from Crane. The author wonders about Williams and the victims and through telling the facts of the crimes he shows great respect for the victims and families by not adding anything gratuitous or more than is needed to show William's true cold-blooded monstrosity. I haven't read anything else on Williams except the news at the time but it's an interesting case for two reasons: Williams seems to be atypical waking up one day in his forties to start upon the path to becoming a serial killer and secondly he's the first Canadian military member to be stripped of his rank, his name fully removed from historical records, had his uniforms burned and medals cut up. A good introduction to the case!