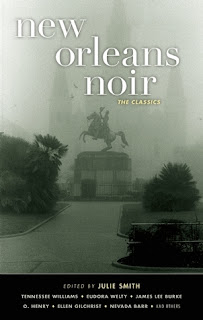 edited by Julie Smith
My rating: 4 of 5 stars


I've long wanted to read one of Akashic's Noir anthologies and was pleased to have my first tour a sampling of southern fiction set in New Orleans. Each story here is set in the city and this being the second collection to be set here has been given a secondary theme of "classics". The stories are presented chronologically from 1843 up through to fairly modern offerings. The definition of "noir" is broad. This can mean classic private eye, gothic, dark, menacing and generally involve murder, but one thing they all have in common is ominous troubled endings. There were a couple of stories that missed the mark with me but generally the rest were good to excellent. I certainly look forward to reading other's in this publisher's series.

1. A Marriage of Conscience by Armand Lanusse (1843) - This first story is noir in the sense that it is dark but otherwise is more fairly termed as Gothic. A melodramatic piece of a pure-hearted young woman who finally gives her heart to a man who does her wrong once he has her. She cannot stand the disgrace afterward and publicly involves him in her own suicide. I loved the despair. (3/5)

2. The Little Convent Girl by Grace King (1893) - This is sad and morose with a final depressing ending. After the death of her father, the little girl who has been raised in a convent travels on a Mississippi steamer to Connecticut to meet her mother for the very first time. One needs to take some time to ponder what may have caused the tragic ending. (4/5)

4. Whistling Dick's Christmas Stocking by O. Henry (1899) - This is the last story in part one and the closest to an actual noir in the sense that it has a crime though it is a happy story and a Christmas story to boot. A hobo meets some unexpected adversity one day, but along the way also meets unexpected kindness. He ends up with some friends who want to pull off a robbery but he's not that sort. He saves the day but in the end, chooses freedom over luxury. Pleasant story but I'm not really big on O. Henry. (3/5)

Part Two skips almost forty years in time to the era when noir is more what we can expect it to be.

5. The Purple Hat by Eudora Welty (1941) - A tale told at a bar by a man in the know to a bartender but is he perhaps really telling the story to the young man sitting alone at the other end of the bar. It's the story of an exotic older gambling woman, a seductress, who always plays and wins at the saloon the man works in. She's been murdered twice and wears an enigmatic purple hat. (4/5)

7. Miss Yellow Eyes by Shirley Ann Grau (1955) - Whoa. Heavy duty. An epic family story set during WWII of an African-American family and issues they face within their own community such as a couple who plan to move north and pass as white after the war is over. A powerful story that gets more intense as it goes along, reaching a point where things take a downward turn until the tragic ending. This is the longest story in the collection so far. Powerful. (5/5)

8. Pleadings by John William (1976) - A novella divided into parts or chapters, even longer than the previous piece and is quite different than the others as we have twenty-year gap chronologically in writing. Several themes are covered here but first we have a lawyer story one who becomes involved not so much in a case but in some people's "troubles" because they are brought to him as being friends of someone he knows. A domestic case where the man is seeking divorce, making up allegations, because he cannot deal any longer with their "vegetative" son in a home for the "feebleminded" since birth. This is a dark story and hard to read, practically every derogatory word imaginable (from the era this story was written) for the mentally ill is used from the beginning and gets worse as the lawyer actually takes a tour of the asylum. The father and the lawyer refer to these patients, not as he or she but "it". Though this takes a strong stomach, it suits the story as "Pleadings" is ultimately a tale of reconciliation, and a purging of sin through fire, a suitable redemptive ending, though not happy in the typical sense of the word. Powerful, well-written. (5/5)

9. Ritual Murder by Tom Dent (1978) - I've never heard of this author but this is the most powerful story I've yet read here. And it's not actually a story but a play; it's been a very long time since I've read a play (excepting Shakespeare) and the effect is moving. This is a story of black on black violence in the '70s but is a hard-hitting and gut-wrenchingly realistic read today to see how much things stay the same even though they change. A frank and potent play which would be chilling to see performed live. (5/5)

10. Rich by Ellen Gilchrist (1978)- The first story in part three is written in the same year as the last story and even after a string of 5-star stories is my favourite one so far. A true blue Southern Gothic about a seemingly wonderful well-off southern family. Life isn't perfect, but they go with the flow, have common sense and make the most of everything seeming to have the best of everything. But, being faithfully Catholic, they know everyone has a cross to bear and they bear theirs well. It wears them down eventually, nevertheless, until tragedy strikes and one of them breaks so hard he goes beyond the point of no return. Gloriously gloomy. Loved it! (5/5)

11. Spats by Valerie Martin (1988) - The story of a woman whose husband leaves her for another woman, but worst of all he leaves his beloved dogs behind because they aren't allowed at the new lover's home. I didn't connect with this. The woman moaned about being alone and one of the dogs was viscous, so she took revenge on her husband. I had no feelings for any of the characters, including the dogs. (2/5)

12. The Man With Moon Hands by O'Neil De Noux (1993) - This is short and strange. A cop meets up with two weirdos with guns and shoots one but not the other, who turns out to be a nutcase who thinks he has moon hands and waits every night with a bag packed for his ride to Alpha Six. The cop ends up watching him for a few years, then gets transferred to homicide, Now three years later he's called to a self-defense shooting by a cop. Didn't seem to have a point. (2/5)

13. Rose by John Biguenet (1999) - Very short. After his wife's funeral, a man discovers to what length she had gone to remember their little boy who had been killed in an accident when he was young. (3/5)

14. Mussolini and the Axeman's Jazz by Poppy Z. Brite (1995) - Duke Ferdinand was not really killed by the assassin charged with his murder, in fact, it was a three-hundred-year-old Italian mage. Ferdinand's spirit come's back, inhabit's a drunken ex-cop's body and seek's out the mage in the 1919's before he can go on to an imminent future and another World War and become another Italian terror. In the meantime, the Ferdinand embodied cop becomes known as the New Orlean's Axeman. Pretty strange, but I liked it! (4/5)

16. Jesus Out to Sea by James Lee Burke (2006) - A group of guys are experiencing a very bad hurricane (Katrina I'm supposing) and they end up floating along with a Jesus statue. Atmospheric. (4/5)

17. Last Fair Deal Gone Down by Ace Atkins (2010) - Good ole New Orleans blues and jazz scene murder mystery. A detecting sax player gets caught up in the seamier side of life while solving the death of a beloved local sax player. This is totally my type of story. (5/5)

18. Pie Man by Maurice Carlos Ruffin (2012) - This has a very abrupt ending; I had to check and make sure I hadn't skipped a page. Plus I'm not sure why it's called Pie Man as he's only a peripheral character. However, this is quite an intense story of race violence set a few years after Hurricane Katrina. The story labels it as "brown-on-black" violence and we see a neighbourhood under attack by its youth because of an instance of robbery gone wrong. Baby, a fourteen-year-old is the main character and narrator but we see the situation from most sides except the shooter's, a Latino carpenter, who was robbed. Baby is quite mature in this situation, though, having been close friends with Sanchez, he can at times see his point of view, but, in the end, becomes a victim of his gang pride and peer pressure. A riveting read and well-placed story to end the collection with. (5/5)