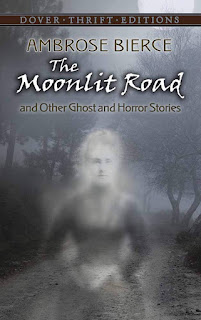 The Moonlit Road and Other Ghost and Horror Stories

by Ambrose Bierce
My rating: 4 of 5 stars


Ambrose Bierce (1842-1914) was a Victorian author of the weird and macabre specialing in ghost stories. Though during his life he was more renowned as a satirist, journalist, and editorialist. Thankfully, we've remembered him for his eerie tales. I've come across his stories in anthologies several times but this is the first author specific collection I've read. I had come across three of these stories before, but they make good re-reading. Bierce is comparable to Poe but easier to read. The stories in this collection have been selected from the 1909-1912 editions of "The Collected Works of Ambrose Bierce" and show a mix of his ghost and, as the title calls them, "horror" stories (but I wouldn't necessarily give them that classification, but more general simply "weird tales"). I liked the weird, macabre tales the best and I'd recommend him to your reading list for those interested in Victorian ghost stories or tales of the weird.

1) The Eyes of the Panther - A young woman refuses to marry a man repeatedly and he demands to know why so she tells him she is insane and proceeds to tell him a story. It's a good story but it made me think too much of the original movie "Cat People", perhaps they got the idea from this story. (3/5)

2) The Moonlit Road - I hadn't recognized just by the title but it came to me quickly that I've read this one before. A son is called home from college urgently to discover his mother has been brutally murdered. Shortly afterward his father, while out on a walk with him, takes off and disappears forever. Told in three points of view first from the son, then the father and finally the mother, through the aid of a medium. None of them knows the whole truth, only the reader is able put most of it together, but afterthought still leaves a few questions. A creepy story. (4/5)

3) The Boarded Window - This is a creepy shocker that you have no idea where it is going. It starts off easy going enough and you wonder where it is going by the halfway point; it is quite short. Then it starts getting interesting with the tension mounting and pow! it gets you with the ending. (5/5)

4) The Man and the Snake - Another creepy little story with the shocker ending. This time, it leaves you puzzled wondering if what occurred was real or all in the mind. (5/5)

5) The Secret of Macarger's Gulch - A well-told ghost story! A man stops at an abandoned house in the middle of nowhere. He can't get to sleep because of a feeling of danger, perhaps a bear or a ghost? He does fall asleep, dreams, then wakes up and that is when the adventure begins. Leaves an uneasy feeling. (5/5)

6) The Middle Toe of the Right Foot - Oh I liked this, not very frightening but a bit grizzly to start. A house remains abandoned because of its claim to be haunted but not least likely because the former owner one night slashed the throats of his wife and two children and then absconded into the night. Some time later the house becomes the designated sight of two gentlemen who have called each other out to a duel: a knife fight in a darkened room. (4/5)

7) A Psychological Shipwreck - A man has a vision of an encounter with a young woman on a sinking ship, then rouses to find that he himself has been fine and dandy on another ship all this time. Then ensues an interesting story. A bit "whoo-whoo" for the times but didn't do much for me. (3/5)

8) A Holy Terror - This is just plain creepy. I'm not sure if it is a ghost story or not but a man does meet up with a skeleton and his death while grave digging and that is only a part of the story! A man goes to a ghost town that was once a thriving California Gold Rush town. Now deserted he plots off a stake and decidedly sets out looking for something specific and then we are told his curious history and what follows. This is the longest story in the collection so far. (4/5)

9) John Bartine's Watch: A Story by a Physician - A fairly short story of a man who is troubled by the watch of an ancestor who was taken away as a traitor to the rebel George Washington and never heard from again. Atmospheric, but predictable ending. (3/5)

10) Beyond the Wall - A man visits an old friend he hasn't seen in some time to find him in a dejected state, upon hearing a tapping on his tower wall the friend relates a tale of unremitted love, sorrow, death and ghosts. Again very atmospheric. (4/5)

11) A Watcher by the Dead - Three doctors play a game by betting that a man cannot spend the night in an abandoned house with a corpse in the dark due to some theory they have. Things turn out as we suspect but there is a surprising twist ending and then the author turns to humour to finish off the tale. I didn't like the funny part but the rest was good. (4/5)

12) Moxon's Master - This would have been a chilling tale at its own time. One that deals with whether machine's have intelligence. The first half was a bit boring for me as the philosophy and science is outdated by modern standards but I can imagine the thought it provoked at the time. Then it gets into the story of whether one man, a machinist, has created a thinking machine. It has a creepy ending. I really enjoyed this, though, because it explored an automaton chess player and a few years ago I read a graphic novel on *the* famous Victorian automaton chess player which was very good. (4/5)