Tales of Court and Castle by Joan Bodger 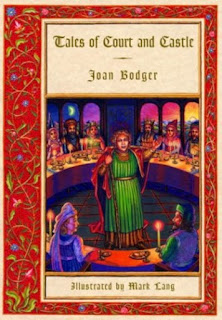 Tales of Court and Castle


A collection of medieval tales of knights, kings and princess, mostly Welsh, from renowned late Canadian storyteller Joan Bodger. These are short tales and are meant for children, they have been captured here in print but are meant for reading aloud. The stories are vivid and full of wonder and do beg to be spoken aloud. I'd never heard of Bodger before and this is just a short sampling of her work to whet the appetite of what she must have been like to hear live. The illustrations that accompany the text are gorgeously detailed line drawings.

1) Young Tristan - Tristan's story of how he won back his land as King but gave it up to serve King Mark as a knight. A Welsh tale.

2) To the Dark Tower - a grand retelling of the Childe Roland poem, with some verses kept between the narrative. Also has Merlin in it.

3) Iron John - This tale is new to me! A cursed forest and a naughty prince whose curiosity begets him the favour of the man-creature living in the forest. This has it all: curses, enchantments, and princesses to be won.

5) The Warrior Queen - An Irish King and Queen are talking in bed and arguing over who is better, richer, has more, etc, and inevitably this "pillow talk" leads to all the troubles in Ireland. This one is pretty wordy and I'd see it going over better orally than being read silently.

6) The Roman Emperor and the Welsh Princess - I can't place this to any true story or tale I've heard before but, a Roman emperor dreams of the most beautiful woman in the world. She is finally tracked down and found to be a Welsh Princess. After much battle, winning the British Isles, and taking back Rome from a usurper they rule the Roman Empire for many years.

7) Tristan Hero - And the book comes full circle with the heroic tale of Tristan's death.