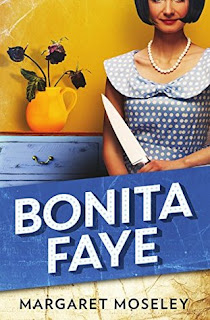 by Margaret Moseley
My rating: 5 of 5 stars


A fantastic surprise! I would say I was hooked by the first chapter but truth be told I was hooked by the first paragraph! Bonita Faye is quite the character and if you are used to reading southern fiction Bonita is up there with the best. This is not a spoiler because I'm going to talk about the very first sentence in the book. Bonita Faye starts her story off by telling us her secret, that she killed her no-good husband Billy Roy and does in such a charming manner I was soon gasping with laughter. Bonita is writing from her golden years and goes back and forth into the past to tell us her story which centres around that defining moment that changed her life when that abusive overbearing man left her life. It's hard to describe the genre here, I wouldn't call it mystery but there are more than the one murder so I'm apt to call it Southern Noir with high doses of humour. Sincerely, the book is more about a young Okie (part Arkie) woman raped by her step-father at 14, married to black-eyed Billy Roy at 17, uneducated who takes her life (and another's) into her own hands one day and sets forth to learn to accept her soul, love herself, and find the true-love of her life, but she finds two. Half the book takes place in Paris, France in the days after the liberation and end of WWII. This is where she has her awakening and education but darkness is here too. It's a gritty story, with the poverty and abuse of Bonita's early life, the Resistance and Nazi-occupied France repercussions still alive in the new French society, her last husband fights in the Korean war and Bonita has lived a hardscrabble life to get where she gets. However, throughout this book, it is first and foremost a Southern Fiction tale of charm and comedy. Humour is the order of the day and I've literally not enjoyed a book simply so much because it made me smile for some time. Bonita is the type of woman you want to have for a friend, a true southern woman, perhaps from the wrong side of the tracks, but she raised herself up and kept the best of both worlds chucking what she had no use for from each. Laugh out loud funny with its hijinx and charm.