The Skeleton Tree by Iain Lawrence 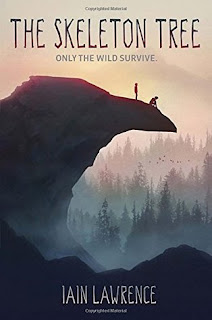 by Iain Lawrence
My rating: 5 of 5 stars


I enjoy survival stories and have been impressed with the two previous books I've read (here and here) by this author. The Skeleton Tree lived up to my expectations. Two young boys are sailing down the Alaskan coast with Jack, uncle to one of the boys when a storm hits and tragedy strikes ending with Jack drowning right before his nephew's eyes. The two boys end stranded on the coast of Alaska with a forest behind them and mountains close by. This is a survival story and theirs isn't as tough as some situations can be, but it is realistic. They've landed near a river during salmon season, they find a rough-made cabin that someone had prepared to be there for a while but obviously left in a hurry, and the elder boy is outdoorsy. But the boys know they won't make it through a winter, so they try to prepare. These boy's don't know each other either and therein lies a mystery. The nephew is twelve, the other 15. Frank, the teenager is mean, bossy, a know-it-all and the two never truly have a happy day together as they can't get along with his attitude hanging over everything, but why did Uncle Jack bring them both along. He was going to tell them something before the storm. And Chris is sure Frank knows the answers and maybe that is why he hates him. The dialogue is real between the teens, the situations are intense and one never knows whether rescue or revealing the secret is the ultimate goal of the plot. The ending leaves one pondering about the boys' future and I like that in a book; it helps to make the characters seem more real. Well-written, with a good pace, and a fast page-turner for me. Highly recommended for young teen boys. I must read more of this author.