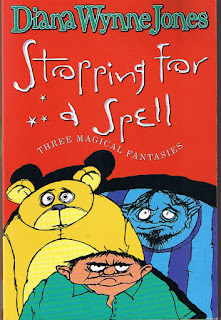 by Diana Wynne Jones; illus by Chris Mould
My rating: 4 of 5 stars


A collection of three previously published stories by Diana Wynne Jones. The first two were published as individual titles in Great Britain and the third was included in a British anthology. They were then collected together and published for the first time in North America as this combined edition. The stories all follow a theme of the "uninvited guest" and are aimed at the younger reader, perhaps 10 and under. They are hilarious fantasies told with tongue firmly planted in cheek and should please readers of any age who like a bit of wicked fun. Diana's fans will find these short stories to be little gems they may not have come across before and they are sure to delight Wynne Jones' followers. It will remain a keeper for my shelves.

1} Chair Person (1989) - Pure delight! An old chair that's been sat in front of the TV for longer than anyone can remember is losing its stuffing and the family finally decides to replace it. After a spill from a second-hand shop's toy magician's kit brings the chair to life the pretentious chair person moves in, won't leave, embarrasses and bosses them, making them desperate to find a way to get rid of him. Hilarious! (5/5)

2) The Four Grannies (1980) - This one feels a bit Roald Dahl-ish. Erg and Emily's parents go away for four days and call a granny to come look after them for the duration. Due to divorces, the children have four grannies and each is horrible in her own unique way. None can take on the job, but of course, in the end, all of them arrive after the parents leave. Nasty grannies and a magic chopstick-wand make for a wild first day. (4/5)

3) Who Got Rid of Angus Flint? (orig. The Fearsome Friend) (1975) - This is the shortest story and quite silly, but nevertheless quite fun and certainly will entertain its intended young audience of perhaps 7-9. Angus Flint, a friend of Dad Roberts from college days calls upon him out of the blue asking if he can stay for a while since his wife has just left him. Upon his arrival, the family is dismayed to find him a belligerent, self-centered, bossy, ungrateful tyrant who rules their roost. The parents manage by escaping by day leaving the kids with the brunt of Angus's bullish eccentricities and finding a way to make him leave. Fun but no explanation as to where the magic comes from and the story is mostly geared toward younger children. (3/5)