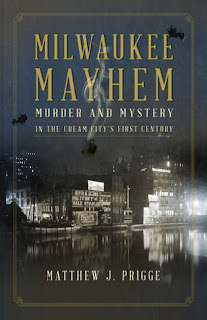 by Matthew J. Prigge
My rating: 4 of 5 stars


A collection of dark tales from Milwaukee's early history taken from the newspapers, written in the author's own words. Divided into four sections: Murder, Accidents, Vice, and Secrets. The stories have no segues between them and are in no chronological order; they are simply vignettes ranging from a paragraph to three pages long. Themes are arranged together such as all suicides are together, as are fires, poisonings, prohibition cases etc. I had expected more of a flowing narrative than a collection of stories so took off to a slow start, but once I decided to read about 25 pages in a sitting I enjoyed the book much more in the small doses and found many of the stories interesting. Personally, rather than satisfying my interest in true crime, I found the book more satiated my appetite for social history. Much can be gleaned from these stories on social attitudes at the time. I especially enjoyed the chapter on vice, not because it was salacious by any means, but because of the information I gleaned on such matters as flappers, police procedures, the youth of the day, and a funny story on a crusade to ban kissing not for moral reasons but because of the germs! LOL. The stories range from the 1850s to the 1920s, with some from the '30s and a handful from the war years of the '40s. Interesting for its stories of crime and the underbelly of society in the early 20th century but most fascinating, in my opinion, from a social history aspect of the era.