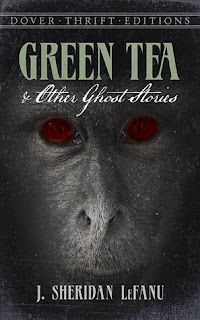 Green Tea and Other Ghost Stories

by Joseph Sheridan Le Fanu. Introduction by John Grafton
My rating: 3.5 of 5 stars

Paperback, 96 pages
Published October 21st 2015 by Dover Publications
Reprint of a 1993 edition
Source: egalley via Netgalley AND I own the 1993 print edition


A collection of four long, short stories by the great Victorian writer most known for his ghost stories though he did write over a dozen Gothic novels. I like LeFanu though I've only been reading him for several years. He's a bit hit and miss with me. I love his signature ghost stories, his stories of the macabre and those that fall under the label Gothic. His writing can be a bit too descriptive for my tastes and topics too metaphysical for my likes, but I'll always give him a go. This collection is a good sampling of what he has to offer, especially if you are not familiar with him. It's certainly not a "Best of" but does showcase some different plots (as I've mentioned) and lengths of his tales. It also features an interesting introduction to the author by John Grafton.

1. Green Tea (1869)- Well, I can't say I'm too taken with this one. A man starts seeing a little monkey, who eventually gets aggressive and speaks telling him what to do. (an imp? a demon?). A doctor believes it to be some sort of spiritual manifestation which we bring upon ourselves and, in this case, the man opens his sight to this world through overdrinking green tea. Weird and strange but not in a way that entertained me. (2/5)

2. Squire Toby's Will: A Ghost Story (1868) - Now this is more like it! Much too dense of a tale to summarize but briefly; an old Squire prefers his youngest son over his eldest, he's a drunken, hateful old man and dies the same. Leaving his almost impoverished estate to his youngest brings about a vicious feud between the brothers; but in his death, the old Squire seems to have seen the error of his ways toward his eldest yet hasn't lost his meanness. He haunts his youngest son and after an accident, the eldest joins him and the youngest lives a life of terror haunted by these nasty ghosts. Very well done. (5/5)

3. The Fortune's of Sir Robert Ardagh, Being a Second Extract from the Papers of the late Father Purcell (1838) - This is more of a Gothic ghost story with an old atmospheric house and a dark, moody, brooding man. The first half of the story is a narrative of the legend of Sir Ardagh's mysterious reclusive life and strange death while the second half is a retelling of the truth from an eyewitness of his normal life, how he became reclusive and strange death. The truth is very different from the legend and yet each is no stranger nor mysterious than the other. This is all very creepy with no explanations whatever, which I wish there were. (4/5)

4. Sir Dominick's Bargain: A Legend of Dunoran (1872) - This is the shortest story in the collection but LeFanu is a master dramatist at filling his tales to overflowing with plots. A bit of a tale within a tale, our narrator comes upon a rundown house in the woods and meets an old hunchback who proceeds to tell him a story of the last owner of the house, a man who sold his soul to the devil. The beginning is a bit too flowery with description for my tastes but once the plot gets underway LeFanu has me in his hands. (3/5)