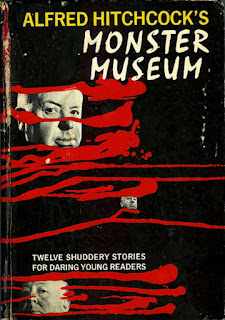 
This is a great collection of mostly science fiction from the fifties with a few from earlier days. These stories were all previously published in the sci-fi magazines of the era and were curated together here with a theme of "monsters" and chosen as appropriate for young readers. I loved these Alfred Hitchcock collections as a kid and I'm pleased to say I thoroughly enjoyed reading this as an adult. The selection of authors contains a few famous names, and other lesser-known names but research shows they were all prolific short story writers. I really enjoyed the selection only finding one dud in the whole group and several very excellent ones.

1. The Day of the Dragon by Guy Endore (1934) - An apocalyptic tale of how an underappreciated professor brings about the apocalypse. He determines to experiment on alligator brains to improve their slothfulness and eventually succeeds but his experiments not only become lively they start to change, evolve as it were, until they become dragons, eventually mating, man-eating. The narrator, one of the last of the human race left living underground records the tale from the beginning for posterity's sake, in case the human race does survive, which he admits is not likely. Readable, but scientifically dated from the thirties. (3/5)

2. The King of the Cats by Stephan Vincent Benet (1929) - Wickedly delicious! I loved this! Rather like a fairy tale in some ways, but contemporary. A man is in love with a Siamese princess who is visiting New York but then a famed conductor comes to town whose claim to fame is that he has a tail. A bit of a mystery follows with the paranormal. Romantic gothic. Delightful. (5/5)

3. Slime by Joseph Payne Brennan (1953) - This was written five years before the cult hit movie "The Blob" but is basically the same thing. Here the slime is some sort of primordial beast from the sea who makes its way to land and starts absorbing living beings leading its way up to humans. As typical with '50s monster movies, the army is called in, well the Home Guard in this case, and they figure out its weakness and save the world. Typical of its genre. (3/5)

4. The Man Who Sold Rope to the Gnoles by Idris Seabright (1951) - Macabre little tale of a salesman who goes to a house inhabited by unknown creatures to sell his wares. It ends as one would expect. (3/5)

5. Henry Martindale, Great Dane by Miriam Allen deFord (1954) - My favourite story so far. A writer of short fiction wakes up one morning, with shades of Kafka, to find he has turned into a great dane. He and his wife wait a week to see if he'll change back but he doesn't and they determine he has the body of a dog, the instincts of the dog, but has retained his human eyes, human voice, and human brain. They pack up and move to the country where no one will know them. In this, I felt the most for the wife who was given little choice in the matter and I think the real monster here was not the dog the husband turned into but the husband's true self that never changed and held an unfortunate dominance over the woman until the (to me) tragic end. Of course, she had plenty of opportunities to change the outcome but never took any. A freaky story. (5/5)

6. The Microscopic Giants by Paul Ernst (1936) - A copper mining operation taking place in the depths of the earth for the war effort has the miners discovering fossilized tiny little feet. Until the footprints start to multiply and then a tiny person is seen and the two men in charge go to investigate. A great sci-fi story from this age, filled with pseudo-science but creepy nonetheless. (4/5)

7. The Young One by Jerome Bixby (1953) - I really liked this! A family moves to America from Hungary deciding it is time to give up the old ways and get by as humans in the New World which doesn't believe in their kind. Their young son knows he's different but doesn't know what he is yet, but after he befriends a local boy whose insatiable curiosity makes him play a trick on the young boy to learn his secret himself, he luckily keeps his life and makes the boy's parents decide it is time to tell their son the truth. Fun and unexpected turn of events. (5/5)

8. Doomsday Deferred by Will F. Jenkins (1949) - Really enjoyed this! A man goes to the Brazil jungle to find a rare butterfly and gets caught up in a horrifying insect invasion. A hive collective of army ants are controlling a lone family far out in the jungle but the entomologist realizes how close they are to gaining control of mankind. With his insect knowledge, he saves the day, South America and perhaps the world. Good old-fashioned apocalyptic fifties fiction. (5/5)

9. Shadow, Shadow on the Wall by Theodore Sturgeon (1950) - A vicious stepmother gets hers after she locks a boy in his room with all his toys removed while his dad is away on business. Creepy! (4/5)

10. The Desrick on Yandro by Manly Wade Wellman (1952) - This has to come in as my second favourite! A creepy story written like a Smoky Mountain legend. A guitar-playing hitch-hiker ends up taking a power-hungry, greedy rich man back to his grandfather's origins in the Smokies. Well-told. (5/5)

11. The Wheelbarrow Boy by Richard Parker (1953) - A strange little magical tale which seems to be bemoaning the loss of corporal punishment in the schools. I think (?) it may have been meant as satire at the time it was written. Doesn't hold up well. (2/5)

12. Homecoming by Ray Bradbury (1946) - I like this story, it's a fun family to imagine. Bradbury paints the characters vividly so we can see how wild this Hallowe'en homecoming party must be. But it is a sad story and even though mortal Timothy is assured by both his mother and a favourite Uncle that he is loved and will be even beyond death, I can't help but think that doesn't satisfy Timothy. I think Timothy wants them to tell him that if he dies they will use their powers to bring him back, and he is dejected by their assurances that he will have it better as a mortal. This story always leaves me feeling sad for Timothy. (4/5)