The Fairy Tales Of Ireland by W.B. Yeats 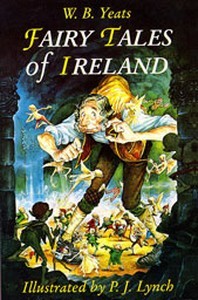 The Fairy Tales Of Ireland

by W.B. Yeats; illus by P.J. Lynch;
introduction by Neil Philip
My rating: 3 of 5 stars

Not a particularly entertaining book. I'm not a poetry person so Yeats' authorship had nothing to do with my choice of the book. The illustrations are very nice. Each tale is headed with a silhouette and then includes one or more detailed ink drawings depending on the length. This makes the book look like a children's book. However, the introductory essay on Yeats' connection with fairy tales is scholarly as are the notes on each tale at the back. This particular book contains a selection of Yeats' tales which he collected in two volumes in the late 1800s, for a sampling of 20 tales all told. Frankly, Yeats does not have a storytellers' voice here and I was underwhelmed. I've read a lot of fairy and folk tales and a master teller Yeats is not. I hadn't heard any of these before, except the Finn Mc'Coul one, so I plowed on, but I'd not recommend this and am not keeping it for my fairy tale collection.

Introduction by Neil Philip - An essay on Yeats and his connections with Irish folklore.

2. The Priest's Supper - A priest comes to supper and the "good folk" make the owner ask him if they, the good folk, will rise on the Judgement Day. Boring. Not funny or anything.

3. The Legend of Knockgrafton -A hump-backed man is rewarded for aiding the fairies. When another hump-backed man hears of this he goes to the fairies to get his reward. Naturally this greedy man does get something, but only what he deserves. Ha!

4. A Donegal Fairy - A one-page story where the week folk, in discussion, confirm that they take care of their own but if an outsider harms them then they take revenge.

6. A Legend of Knockmany - A Fin M'Coul story in which the giant hears that another giant stronger than him is out to prove his strength by besting him. M'Coul, with the help of his wife, defeats his enemy with the use of wits instead of strength.

7. The Twelve Wild Geese - My favourite! Starts off as a Snow White variation but very different with "Snow-white-and-Rose-red" going off to find her twelve brothers who have been turned into geese who live in the forest as geese by day and men as night.

8. The Lazy Beauty and Her Aunts - This is a funny one with a Rumplestiltskin feel to it, but Anastasia has three fairies help her with the spinning, weaving, and sewing. Everything turns out happily ever after for her, but the storyteller has a funny coda for the reader to make sure we won't think the same would go for us.

9. The Haughty Princess - A "Taming of the Shrew" story. A prideful princess refuses every King, Prince and Duke in the land, so her father says he will give her to the next beggarman who knocks at the door. Next morning, a knock at the door is met with the bride and a priest and so she is married to a minstrel. She soon regrets her pride as it is broken while she is shown the way of the working world. In the end, it's all a trick.

10. Far Darrig in Donegal - Well here's a creepy one! A man seeking refuge in the night is turned away because the occupants will only let him in if he has a story to tell, which he declines. Then off he sets and spends the rest of the night caught up with four men and a corpse. Twist ending to give you the chills.

11. Donald and His Neighbours - A story of three cruel and stupid men. Two men continuously try to kill Donald as they are jealous of him but Donald is smarter and crueler than Hudden and Dudden and always bests them. I can imagine this being funny told out loud by a storyteller with an Irish brogue.

12. Master and Man. A drunkard is obliged to seven years service to one of the "good folk", a withered little old man and they go out every night on magical jaunts invading every wine cellar in the country until the 1000-year-old gnome wants to steal himself a young bride.

13. The Witches' Excursion - A young man watches some witches one night and steals a red cap, learning their chant. It eventually gets him into trouble, the hanging kind, but ultimately is his rescue as well.

14. The Man Who Never Knew Fear - A man who has no fear goes in search of it and faces many challenges. Finally, he encounters a ghost who hails him a hero and rewards him with marriage to his daughter.

15. The Horned Women - A house is visited upon by witches with horns from one to twelve each, but the mistress of the house is rescued by the Spirit of the Well.

16. Daniel O'Rourke - Now this is a good yarn! A man has a bit too much to drink and off he goes to adventure, meeting talking eagles, flying to the moon going to the bottom of the sea, etc. and then it concludes with a laugh out loud ending.

17. The Soul Cages - This may be my favourite story in the collection simply because it is the best tale. It contains all the elements of an Irish fairy tale in one story: a drunkard, one of the "good folk", a religious element and an ending where everything turns out quite well for the human with no lesson learnt. This story contains a "Merrow", what we would call a merman, and I love the description of him; it's different than we usually think of merfolk but very feasible.

18. The Giant's Stairs - A man has a dream that a wealthy boy who disappeared seven years ago has been kidnapped by a giant and his service is finished the next evening and the man will be well paid if he goes and rescues him.

19. The Enchantment of Earl Gerald - A great leader in battle, this is the story of how Earl Gerald disappeared and when he will return to lead Ireland to freedom (from the English) and be its King.

20. The Story of the Little Bird - A monk sees a bird flitting around then appears another monk who he's never seen before but his name is that of a holy man who lived there hundreds of years before. The man dies and asks for absolution. The bird was the other monk who was an angel. This was God's chosen method of taking this man's soul.

Notes - mostly tells where each story originated with some history of the tale and other names it goes by. Many of the tales came from Thomas Crofton Croker's "Fairy Legends and Traditions of the South of Ireland" (1825-28). I would have preferred each note to proceed each story by way of an introduction rather than being hid at the back.