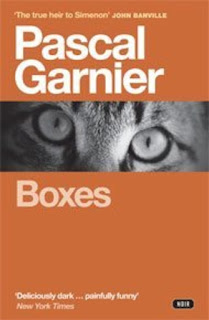 
The cover of this book caught my eye and then when I saw the author being compared with Georges Simenon's psychologicals I just had to give it a try. I am a huge fan of Simenon's psychological novels (though not Maigret). Boxes is described as "noir" and in this case, that word means dark, cynical and depressing. It is comparable to Simenon but doesn't come close to his brilliance. I won't get into the plot as the book is a novella and we only know what is happening as it unravels with the plot. We do know at the beginning that Brice has moved into a new home he and his wife Emma bought, but Emma is missing. Why is eventually slowly revealed. Brice is not a stable person and he meets an equally unstable younger woman in the village to which he has moved. The atmosphere, the characters and the twists of plot are all morbidly bleak but I 'enjoy' unhappy books so that didn't displease me. In fact, I found some brilliant quotes that resonated with me. I do, however, feel that something may have been lost in the translation from the original French as there were some stilted sentences that just didn't flow naturally for me. The ending was abrupt and jarring to say the least. I understand it though I thought it could have been more eloquently written, perhaps it, again, was lost in translation. I am intrigued by the author however and would like to try him again.