Voices in the Field: A Collection of Short Stories by J. Allen Fielder 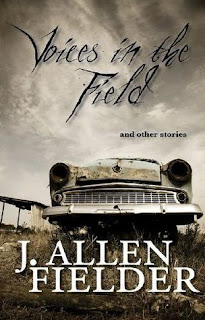 Voices in the Field: A Collection of Short Stories


A mixed bag of stories, this is the author's first collection. A few of the stories have been previously published with the rest appearing here for the first time. Most of the stories are of the horror variety, but there is a bit of everything added to the mix including straight fiction, children's stories, and mysteries. I found the author quite promising though he has some trouble with perfecting the twist ending. His horror is good, but surprisingly I found his juvenile fiction offerings showed his best overall work. His forays into other genres often left me underwhelmed, but I'm glad to have read the collection.

1. Voices in the Field - An elderly man's car breaks down on the side of a highway surrounded by cornfields. He records his thoughts as he waits unsuccessfully for a car to pass by. A chilling story as either the man is a victim to Evil or he descends into madness. The ending needed just an extra something to give it more pow, but this first story certainly makes me look forward to reading more.(3/5)

2. Mom's Eye View (2000) - This is a creepy story of a demented guy I guess you'd call a stalker who's got a major Norman Bates vibe going on. The story gets weirder and creepier as it goes along bringing in twists you never quite suspect. Told from alternating points of view, first the stalker dude, then the girl. The ending works up to a great climax but again is a bit of a let down as I felt it just needed that final piece to be polished. (4/5)

3. One Night in New Orleans - Very short story of a black woman who has never left her native Minnesota before but who goes on a business trip to New Orleans and spends one night of magic under the influence of the spirit world and music which gives her a new "soul" she'll never want to forget. I haven't looked to see who this author is, but the story felt like it was written by a white man. Didn't feel real. (1/5)

4. Liquid - The best story so far. A rich, playboy doctor who cares more for his Armani suits and golf than he does his patients is harassed by a toothless, diseased bum for change. When the Dr. refuses rudely to deal with hm, the bum spits on him and the Dr.'s life forever changes. A moral of "do unto others" and if you don't you'll have to learn your lesson the hard way ... the *very* hard way. (4/5)

5. Homemade Pie - This is a creepy horror story with a good twist ending. A southern teenage girl wants out of the family restaurant business where her mom's pies are such a big business because of the "special ingredient". There's a bit of trouble with the ending again though. There was a perfect point for it to have ended, but then the author added some extra lines which weakened it for me. (4/5)

6. Rain - Very short. A serial killer's multi-million dollar house complete with thousands of tapes is sliding into oblivion during a mudslide in California. A twist ending you can see coming before it even starts. (2/5)

7. Cowboy Up - A cowboy asks a woman to marry him. This is just plain humour so unlike the other stories here. I didn't find it funny. (1/5)

8. Truck Stop Love (2000) - This was well-written and had so many possibilities running through my mind, but none of them panned out. The ending was a real let down. A woman stuck working at a truck stop for the last twenty years has given up on her dreams of ever getting out of the tiny little town when she meets the new waitress, someone who reminds her of herself when she was young. I don't know whether to give it a 3 for the writing or a 2 for not going anywhere. I don't usually do halfsies but in this case ... (2.5/5)

9. Sorry, wrong number (2001) - Not the best story here but the best written. The tension mounts throughout to an almost perfect twist ending. Written as a series of voice messages between a stalker girl and a couple of guys. (4/5)

10. Watching - Very short. Less than a minute. I *think* this is just an example that we don't need to think anymore since we have search engines. I had to read it twice to get it, so I'll give it two stars. (2/5)

11. Toby and the Lake - This was written well and the ending was very good, but I didn't like the story at all. I quickly knew where the story was going. Some people will find it compelling but in the end it's a sympathetic portrayal of someone who is nothing but a murderer. (2/5)

12. End Game - Loved this one! A dark, gloomy tale of a man writing his murder/suicide letter. He's a despicable creature and we are sure we know what is going on, but the twist ending proves we don't and just how vile the man really is. (5/5)

13. A Fire Inside (2001) - Another good one that would fit in the crime or mystery genre. A woman is positive her mother's death was not accidental six years ago and has been calling the police continuously ever since to reopen the case and look closer at murder. For a joke, her call is transferred to "the new guy" and what he uncovers is far more than the daughter could have ever expected or perhaps ever wanted to know. (5/5)

14. The Pumpkin Princess - This is a sweet little story told from the pumpkin's point of view. Obviously written for young children and strange to find in this collection here at this point. Very well-written, has a bit of tension, a perfect Halloween story for little ones. (5/5)

15. Least Likely to Succeed: A Vinita Park Short Mystery for Young Readers (2001) - Good story. An unpopular but brainy kid who often solves mysteries is asked by the most popular girl at school to find out who stole her iPod from her locker. Fine, well-written mystery with an unsuspected ending. More than a mystery story it deals a lot with bullying and includes realistic teen dialogue. We have the viciousness between girls and a mean "fat" kid bully. These last two juvenile stories make me wonder if perhaps this is where the author's forte may lie. (5/5)

17. Weight - The final story comes full circle with another horror offering. A high school student tells of the bullying he's received his whole life because he's fat from other kids, teachers, and his own parents. He's now planning his final revenge. Pretty freaky and a good note to end the book on. (4/5)